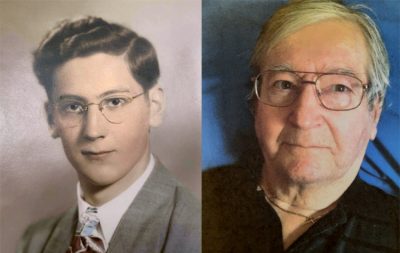 Born of Hungarian descent, Ed started life on a humble farm in Banger, Saskatchewan on Nov. 30, 1932. Life was not easy on the farm due to cold winters and lots of hard work. Ed lived an impressive life. He left home at 13, moved to New Westminster at 15, and started a 40+ year career with Canfor at 16. He met and married Marge at 17, the love of his life. Family was paramount for the Balazs as they raised four kids: David, Eric (Nuria), Cheryl, and Paul (Lisa).  They started in a small house in Port Moody. He built the family home in Port Coquitlam after their fourth and last son was born. This is where they lived on acreage until Ed’s retirement.  Soon the Balazs moved to Salmon Arm where they spent their summers on the ranch and the winters in Arizona. After selling the ranch, Ed built another house in town.

Ed’s talents knew no boundaries as he could do anything that he set his mind to. Always a driven perfectionist, Ed was able to build and repair everything that came his way. Consistently overbuilding – must have had stock in screws and nails: coining the phrase “Balazs Built.” He was a man who knew what he wanted and knew how to get it. Ed was an active member of the Knights of Columbus where he helped provide wheelchairs and surgeries for the less fortunate.  He was an adventurer who lived by the axiom: tight lines and straight shooting! Many, many dinners were the result of Ed’s expertise all stemming from his early childhood. He loved the mountains, his horses, and his wife, Marge. This summer, Ed and Marge, celebrated their 70th wedding anniversary.

Ed was a sensitive man… a strong man…a generous man…and a kind man. Most of all, Ed was a MAN’S MAN. He will be remembered by living a noble life filled with integrity. He will be greatly missed and remembered by his family fondly.

A special thank you to the Bastion Place staff and management who made Ed’s last year’s comfortable and enjoyable.