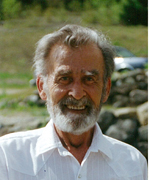 Tony was born at Sunnybrook, AB and passed away at Shuswap Lake General Hospital after a lengthy battle with C.O.P.D. and asthma.

At a young age he moved with his family from Sunnybrook to Picture Butte, AB. He later moved to Calgary.

Tony spent his working years as a farmer, machinist at C.P.R. then a foreman at Domtar Construction materials. He took an early retirement and moved to White Lake where he resided for 20 years. Tony was a volunteer fireman and helped build the Community Hall and helped run the Old Time Dances besides growing a big garden. For health reasons he moved to Salmon Arm in 2005.

Tony is predeceased by his parents and three brothers. He is survived by his wife Elaine, three sons Bob (Chris), Don (Rose) and Rick, one daughter Cheryl (Geoff) Smith, eight grandchildren and six great grandchildren. He is also survived by three sisters and numerous nieces and nephews in the Czech Republic.

Many thanks to the staff, Doctors and Nurses, especially Dr. Grieve, for keeping Tony comfortable in his final two weeks in the hospital.

There will be a family memorial for Tony in Alberta at a later date.