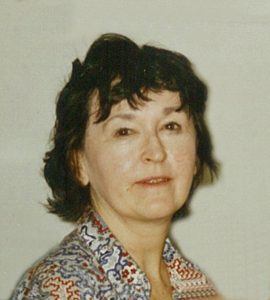 It is with deep sadness we announce the passing of Katherine Frances Blain on Saturday, October 5th, at Shuswap Lake General Hospital.
Katherine was born in Grand Forks, BC, on September 23rd, 1937, the second of six children born to Robert and Margaret Ring. Her family lived in many communities throughout BC until finally settling in Kamloops where she met and married Les Blain. They moved to Salmon Arm in 1965 where they raised their eight children. They owned several businesses including: The Garden of Eatin’ fruit stands, The Broaster Kitchen, and The Market fruit stand at Sandy Point.
Being of Catholic Irish descent, Katherine’s life was rooted in her faith which meant daily Mass and rosary. She would pray by name not only for family and friends but also for anyone who mentioned their troubles to her; so her prayer intention list was quite extensive. She loved reading poetry and history and had a Bible quote or song for just about any occasion. Most of all she will be remembered by her family and friends for her wisdom and wit.
Katherine was predeceased by her husband Les, and sisters Margaret Black and Ellen Ward. She leaves behind children Les (Brenda) Blain, Greg (Glenda) Blain, Lonnie (Barry) Comin, Erin (Gordon) Pelletier, Leah Blain, Teresa (Wayne) Vandell, Rachael Tudan, Kierstin (Harry) Mujcin, and over 50 grandchildren and great-grandchildren. She is also survived by her sisters Terry MacPherson and Genevieve Ring, her brother James Ring, and many nieces and nephews.
The family would like to give special thanks to the home care-aides who were a big part of mother’s life, first helping her care for her husband for 15 years, and then looking after her for the past two years. Mother loved them and enjoyed the conversation and kindness of each and every one.
Thank you also to the wonderful staff at Shuswap Lake Hospital who took amazing care of our mother during her last days. And thank you to Dr. Breugem for his care over the years.
A Mass of Christian burial is being celebrated at St. Joseph’s Catholic Church on Saturday, October 12, at 11 a.m. There will be prayers on Friday, October 11, 7 p.m. at St. Joseph’s parish.