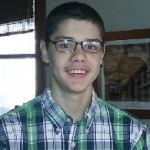 After playing one of the best flag football games of his season, including a “pick 6” interception and return for TD he tragically passed away in a motor vehicle accident on May 4, 2014.

Rodney was extremely proud of his large family, including Mom Andrea and Dad Bert.  His siblings Shannon (Sujeet), Jason (Diane), Coreena (Jayson), Sean (Kirsten), Daine, Kristopher, and Zachary.  Rod also enjoyed spending time as a “younger uncle” to Taelor (Alex) and Chantal and thought it was hilarious that he was going to be a 14 year old great uncle in August.  He was also very close to and loved by his Auntie Sherrie, Uncle Sherman and Avery as well as his Auntie Madeline.  He has a large extended family and numerous cousins.

Rod will be remembered for having the BIGGEST heart of gold.  He was generous to a fault and would help anyone who needed it.  His big grin could light up a room.  He played guitar, banjo, flag and tackle football.  He had a talent for all things mechanical and loved to help Dad run machines.  Rod was well known for spending his pocket money on himself and his friends as fast as he could earn it.  When he received The Helping Hands award at PleasantValleyChristianAcademy, he was the teacher’s unanimous choice.

In lieu of cards the family is requesting you print out a 4×6 snapshot of Rod and write a message on the back.  These photos will be made into a memory book for the family.

Memorial gifts in lieu of flowers, can be made via gofundme.ca, by searching for “In Memory of Rodney Boring”  posted by Alisa Booth.