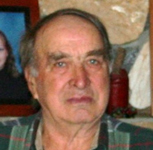 With great sadness we announce the passing of Jake Bosshardt at Kelowna General Hospital on December 15, 2016 at the age of 87. He leaves behind his wife Lorraine (Davidson) Bosshardt, five children Linda (Danny) Moore, Dianne Grinde, Rodney Bosshardt, Roger (Barb) Bosshardt, Tracey (Arden) Thacker, his sister Emmy Baehl of Alberta, 10 grandchildren and five great-grandchildren. Predeceased by four sisters and one brother in Switzerland.

Jake emigrated from Switzerland in 1951 and started working in the logging industry in the Loon Lake area, where he met his wife Lorraine. They were married in Salmon Arm in 1955 and raised their family.  Jake worked for Dept. of Highways for many years and retired to farming, raising purebred Angus cattle. He spent many hours looking over bull stats and sale catalogues. He was also a dedicated hockey fan and would often schedule his farming around “the good old hockey game”

No funeral by request.  Memorial donations in Jake’s name may be made to the Shuswap 4-H Beef Club, 4120 50th Ave. NW, Salmon Arm, BC, V1E 3B6.
Family would like to thank the Ambulance Service, Shuswap Lake General Hospital and Kelowna General Hospital for the care and kind support during this difficult time.