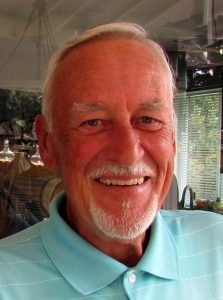 A Celebration of Life for Eric Butler and Wally Martz will be held on Friday, April 26, 2019, 3:00 pm, Shuswap Lake Estates Golf Course

It is with great sadness that we announce the passing of Eric George Butler who died peacefully in Shuswap Lake General Hospital on the evening of January 8, 2019 at the age of 75.  He is survived by his wife Jenni, his brother Don (Diane) and sons Steven, Christopher, Brent (Jenny) and Colin, his grandchildren Alisha, Chase, Deven, Travis, Hailey and Nicholas and great granddaughters Audrie, Addison and Ryleigh.
Eric was born and raised in Horseshoe Bay, West Vancouver and made his career in the West Vancouver Fire and Rescue Service where he had proudly served for 27 years in the permanent department and as a volunteer prior to that.  He was an avid boater and member of Thunderbird Yacht Club and he and his wife had many great boating adventures up the Pacific Coast.
Eric and Jenni moved to the Shuswap in 1998 when Eric retired and after arriving there he was, for some time, a member of the Shuswap Vintage Car Club, the RCMP Veterans club and he served on the Shuswap Fire Suppression Committee.  17 years ago he and Jenni moved to Shuswap Lake Estates and became members of the golf community where he had so many good friends, wonderful neighbours and great golf partners – if not so many great golf scores.
He will be so missed by all of his family and friends but he will always be in our hearts.
The family would like to thank his doctors, and all the nurses and caregivers at the Shuswap Lake General Hospital.
No service is planned immediately, a Celebration of Life will be held at a later date when the weather improves.  If anyone feels inclined, they may make a donation in Eric’s memory to the Shuswap Lake Hospital Foundation.