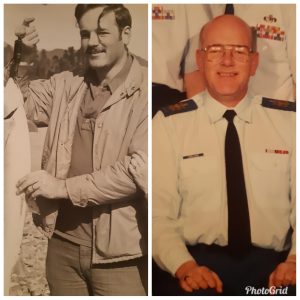 CWO (Ret’d) Lawrence (Larry) Wayne Carlson CD, age 65, passed away peacefully on August 12, 2018 with his family by his side, after a very brief battle with cancer.  Left to mourn his passing are his wife of 45 years Rita (nee Hegadoren), his children Brent and Tamara (Rob), grandchildren Jordan, Jethro, Sativah, Shelby, Sierra and Logan, and great-grandchildren Brayden, Bentley and Fiona. Also left to mourn are his parents Ruben and Evelyn Carlson, sister Ruth (Pat) Herberholz, in-laws Renate Hegadoren, Glenda McNaught, Glenn (Rae) Hegadoren and Harry (Maureen) Hegadoren as well as numerous friends and extended family.
Larry was predeceased by his sister Anne Carlson, father in law Harley Hegadoren and grandson Liam.
Larry was born and raised in Victoria B.C. and joined the Canadian Armed Forces in September of 1970 right after Graduation.  He met the love of his life, Rita, while stationed in Kamloops B.C. and they were married in August 1973.  Larry started out as an Admin Clerk with Construction Engineering, being posted from one end of Canada to the other.  Larry was a very smart, ambitious man, which he put to work in everything he did.  He quickly climbed through the ranks of the Military, and retired at the age of 53 in his 36th year of service in 2006 in Winnipeg M.B. as the first AJAG (Prairie) CWO.
After retirement, Larry and Rita moved to Blind Bay B.C. where he very much enjoyed fishing, camping, puttering around his garage and yard, watching the Canucks and the Blue Jays and especially bowling.  Larry served as the President and Treasurer on the Club 55 Executive for many years and could always be counted on to lend a helping hand with some bowling pointers for anyone who wanted, or needed.  He was a large presence at the lanes and will be greatly missed.
We would like to extend a heartfelt thank you to the Staff on the 4th floor of the Shuswap Lake General Hospital for the wonderful care that Larry received.
As per Larry’s request, no service will be held, but there will be a Celebration of Life in the near future.
In lieu of flowers, donations may be made to the Canadian Cancer Society.