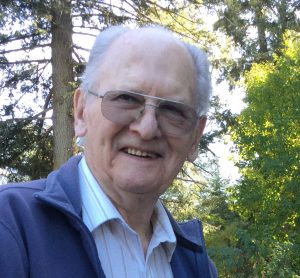 There will be no funeral service, at Vince’s request; family and friends will gather at a later date in Vince’s memory.

Vincent Joseph Cave, 89, of Salmon Arm, British Columbia, passed away on 19 February 2020, at Shuswap Lake General Hospital.
Vince was born on 16 June 1930, in Silver Creek, BC, to the late Annie Rennie McBain & Arthur Bernard Cave, formerly of Salmon Arm, BC; he was the youngest of 7 children.
Vince attended Larch Hills School and graduated from Salmon Arm High School. Early in his working career, Vince worked with his brother, Phil, helping as a millworker, on Phil’s sawmill. He went on to train in Electronics and Refrigeration at the Calgary Technical School, in Alberta.
Following graduation, Vince worked in Nelson, BC, for Nelson Electric. He returned to Salmon Arm and ended up working for many years at Newnes Machine Ltd. (now USNR), until his retirement.
Vince married Bea in 1975 and he became a devoted stepfather to her children. He is survived by Kelly Buckmaster – son Scott; Randy (Ali) Buckmaster – children: Justin & Jennifer (Brandon); Dale Buckmaster – children: Amanda (Warren), Christopher (Sandra) & Corey (Ashley) and nine great grandchildren.  He is also survived by one sister, Amy ‘Irene’ Wells (nee Cave) of Grindrod, BC, two sisters-in-law: Peggy Cave (Surrey) and Eileen Cave (Salmon Arm), as well as five nieces and six nephews.  Vince was predeceased by his wife, Beatrice Marjorie Cave (nee Kulak) on 24 April 2015,  five siblings, Arthur Bernard Cave, Jr., Annie McBain Hucul (nee Cave), George William Cave, Ralph Cave, Phillip Cave, two brothers-in-law: Bill Hucul and Don Wells, as well as one sister-in-law, Chrissy Cave.
Vince was an avid hunter and fisherman who loved the outdoors. He enjoyed camping, bowling, gardening and music. Vince played the Saxophone with his wife, Bea, strumming on the Dobro beside him; they performed in a small band and entertained seniors with their music.
Vince will be remembered as a kind, quiet gentleman who had a good sense of humour.
There will be no funeral service, at Vince’s request; family and friends will gather at a later date in Vince’s memory.