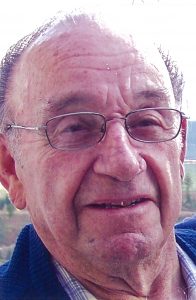 Norm’s family were homesteaders in the Tappen/Skimikin area.  His mother went to Golden, BC to visit her sister and Norm was born there.  His family remained in Tappen until 1927, then to Lee Creek, then onto Kamloops in 1929 and in 1931 they moved to Vancouver, BC.  During WWII, dad worked at Boeing Aircraft and developed a love for airplanes.
As a young man in his twenties he moved to Calgary, AB and worked for Stars Ambulance and Commercial Tire.  It is there he met the love of his life, Margaret.  They married in 1950 and had three children.  In 1969 they moved back to his roots and settled in Salmon Arm.
He worked for the Dept. of Highways and volunteered as an ambulance attendant for a few years.  He retired in 1984 and this gave him time to enjoy his hobbies of ham radio, remote control planes, camping, boating and fishing with his four brothers and families.  He also volunteered many hours to satellite TV in the early days before Salmon Arm got cable.
Norman leaves behind his loving wife of 68 years, Margaret, three children: Nona Reedman (Brian) of Salmon Arm, Keith Dondaneau of Golden and Terry Dondaneau of Salmon Arm, ten grandchildren, twelve great grandchildren and two in the oven.
We will miss Dad’s deep voice, crazy jokes and funny little songs he sang.  We love you and keep singing with the angels in heaven.
Special thanks to Dr. Chris Weicker and the staff at Mt. Ida Mews for their kindness.
A Celebration of Life will be held at a later date.  In lieu of flowers, please donate to the Salmon Arm SPCA or the Salvation Army.