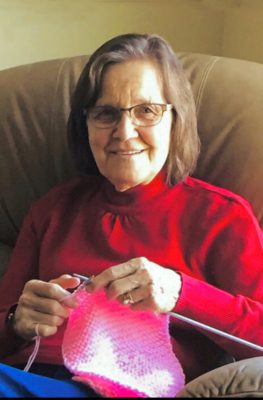 It is with saddened hearts that we say goodbye to Mom, Bernadette Doucette (née Cimon).  She will be greatly missed, yet our many fond memories will live on.

Bernadette was born in the small Northern Alberta community of Donnelly, Alberta. A farm girl, she was resourceful and had a wonderful appreciation of nature and all that it had to offer. As a young adult she attended Fairview Agricultural College where she excelled academically and was captain of the basketball team. After her two years of post-secondary, Bernadette worked as a medical receptionist in McLennan, AB.

In 1958, Bernadette married John, the love of her life. They lived in the Smoky River Area of Northern Alberta where they raised their family. Bernadette and John instilled in their children a passion for sports, a love of gardening, an appreciation for nature and strong family values. After 25 years of successful business partnership, the two retired to White Rock BC to be by the ocean where they remained very active with curling, hiking and RVing across Canada and the United States. Wanting to give back to their community, they contributed many volunteer hours to Canadian Food for Children and Canadian Mental Health. Bernadette leaves many friends at the White Rock Hospital Auxiliary where she volunteered for over 25 years. She was also well known for knitting thousands of slippers which she donated to the Hospital Auxiliary and hundreds of scarves for those in homeless shelters.

In 2016, Bernadette made the move to Lakeside Manor in Salmon Arm. She spoke fondly of the wonderful people at Lakeside, a place that she happily called her home. Connection to her community was of upmost importance to her and she enjoyed both organized and informal activities. She welcomed newcomers to the Manor and always made herself available if someone needed assistance. This gave her a great sense of purpose.

Bernadette’s generosity throughout her life can be summarized by the words of Audrey Hepburn; “As you grow older you will discover that you have two hands.  One for helping yourself, the other for helping others.”.  Bernadette gave everyone in her presence the gift of time; time for a kind word, a helping hand or a gentle moment of support for someone in need.

Thank you to the staff and residents of Lakeside Manor for their friendship and caring. A special thank you to the Interior Health palliative team for their guidance and support.  A private family celebration of life will take place this summer.