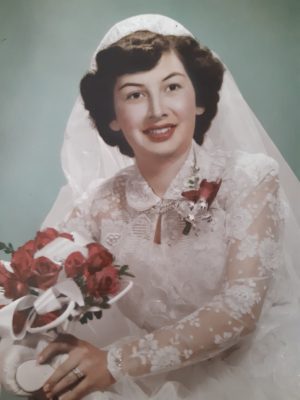 Joyce was working in a restaurant when she met then married, at 22, a handsome young military Frenchman, Jacques Jean Dubois – while his unit was stationed at Southport Airfield, just outside of Portage la Prairie – on May 14, ‘55. Jacques, better know as Jim to townsfolk, is from Montreal, Quebec.

The first son, Philip, was born in Portage la Prairie not long before the new family went to Germany as part of Dad’s military service. Patrick, the second son, was born overseas in Germany, but the family soon returned to Canada, to Quebec City this time. That’s where the third son, Robert, was born eleven months after Patrick was born. The fourth son, Terrence, was also born in Quebec, in a small town called Loretteville, on the outskirts of Montreal. After a few years, the family moved back to Portage la Prairie, so the family can be with Joyce’s mother.

Once the children were old enough to go to school on their own, Joyce began working at the Portage la Prairie Campbell’s Soup factory. With several years of work experience under her belt, Joyce gained employment at the Portage la Prairie Mutual Insurance company. There, Joyce ran the mail room, which took up the entire basement of the building. Joyce was in charge there for many years.

In 1988 Joyce and Jim moved to Winnipeg, Manitoba. Joyce enjoyed working at the Golden Door senior’s care facility in Winnipeg before retiring.

Joyce and Jim spent their early retirement years walking – rain or shine, summer or winter, it didn’t matter, they walked Winnipeg – and had coffee with other seniors doing the same.

In 1999, Terrence and Shirley-Ann invited Mom, Dad and brother Robert to visit them in Salmon Arm, BC. Joyce developed a warm and welcoming feeling for this little town in the Shuswap. In the year 2000, Joyce and Jim moved to Salmon Arm. In 2001, Robert moved to Salmon Arm as well.

Joyce led a life of true innocence, hard work and endless devotion to her family and the home.

She will be sadly missed by family, friends and fellow parishioners.