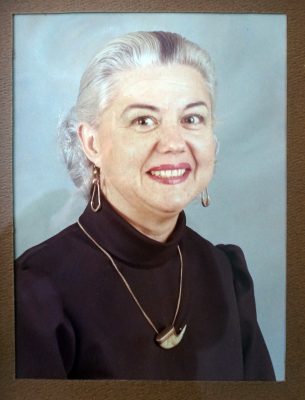 Born in Edmonton, AB and passed away at Salmon Arm, BC.

When Lalita was born, women were not persons under the law and the Great Depression began.

Society’s structures and expectations at the time limited girls’ opportunities and dreams.  At 18 Lalita was forced into a violent marriage. When she escaped with two small sons and daughter, she battled stereotypes and ignorance.  As a single, hard-working mother in the 1950’s, her solace and creative outlet came from making beautiful clothes for herself and her children, and thus, Lalita’s infamous fabric stash began.

In the early 60s she married again and sewed for a new daughter.  In the 70’s she had fun designing and sewing ‘Bob Mackie for Cher’ style gowns for Calgary socialites. Her fabric stash had grown so much people suggested she open a fabric store.  In 1977 she opened Lalita’s Budget Fabrics on Ellis St in Kelowna.  When her main supplier, Fabricland, wanted to locate a store in Kelowna, Lalita was invited to manage the store on Banks Rd. Many Kelowna stitchers will remember her distinctive silver hair in its chignon, her immaculate posture, and her stunning wardrobe.  Lalita remained manager and a supervisor for Fabricland through the 80’s.  She loved the customers and staff, as well as having first look at new patterns and fabric!  During this fulfilling period, Lalita’s fabric stash reached epic proportions.  By the 90s Lalita had retired to concentrate on her garden, orchids, and stitching for grandchildren.

Lalita was a member of the Okanagan Orchid Society. She’d been active with Beta Sigma Phi and had been a Bethel Guardian of Job’s Daughters in Kelowna. Throughout her life, she was interested in spiritual examination, metaphysics, and mysticism. She was a Grand Master of the AMORC and studied ancient spiritual texts and teachings until the end of her life.  In Salmon Arm she enjoyed the OMG meditation group.

In 2006 Lalita and Herb moved to Salmon Arm where two of her children had settled. In 2015 Lalita suffered a stroke and was told she had two weeks to live.  She demanded the doctor order physiotherapy, because she had no intention of dying just yet. Four months later she was living in her own house again.  When her eldest daughter moved to Salmon Arm, all three of Lalita’s kids helped support her determination remain living independently in her house.

Lalita broke her hip in March; after rehab she returned home in April. On June 2 Lalita was taken to Shuswap Lake General Hospital where she passed away peacefully on June 7 at the age of 90, still making plans for new adventures and new creations.

Lalita’s fabric stash is now blessing others, with proceeds to the Women’s Safe House.  Her yarn and beautifully knit sweaters are benefitting Grandmothers for Grandmothers in Africa.

Her children thank the nurses of SLGH 4th floor for their tender care during Lalita’s last days.