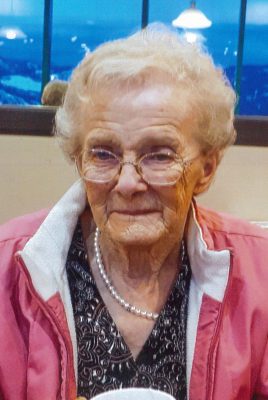 In life, we loved you dearly, in death we love you still.
In our hearts you hold a place, no one else will ever fill. It is with sadness and fond memories that we say goodbye to Nathalia Eberle who passed away peacefully on April 11, 2022 in Salmon Arm, B.C.
Nathalia was born in Ratner, Saskatchewan on July 23, 1940, the second child to Lester and Mary Lokken. Her early years were full of the adventures and hard work that comes from living on a small farm in rural Saskatchewan with family and friends close by.
By the time Nathalia was 17 she was working as a waitress in the nearby town of Nipawin where she met the love of her life, Chris Eberle. The two fell in love almost immediately and although were separated by 1000 miles when Chris went to work in B.C. they kept that spark alive with love letters sent back and forth and lovingly saved to this very day. The two were married in Ratner on July 25, 1958. A few years later Chris and Nathalia moved to Kamloops, B.C. where they raised their five children and stayed until retirement when they moved to Sorrento, B.C.
Nathalia will always be remembered as a gentle and kind soul who loved her family and her dear friends. A garden full of vegetables, homemade bread and buns, buttertarts and pies, and a pantry full of home canning kept her family well fed and happy and ensured that their was always enough food even when unexpected company showed up at mealtime.
Nathalia worked for a time at Tranquille and various group homes in Kamloops, a testimony to her beautiful, caring nature. When retirement came travel and adventure followed. Chris and Nathalia enjoyed cruises to Alaska, adventures in Reno and Nathalia even tried her luck with parasailing in Bermuda!
Nathalia also enjoyed crochet and has had her doily patterns published in magazines and even into her own pattern booklet. Later she would use her talent in crochet to make beautiful afgans for each of her many grandchildren.
Nathalia is lovingly remembered by her children, Roger (Helen), Blain, Marianne (Joe), John, Mark (Chris), her sister, Linda, brother-in-laws, Bernard and Karl, sister-in-laws, Connie, Jo, Karin and Sarah, her grandchildren, Dustin (Nakita), Chelsie (James), Michael (Nicki), Joseph (Jessica), Rose-Marie, Nicholas, Mary, Hannah (Chris) and John, her great grandchildren, Hazel, Dustin Jr., Stephen, Andrew, Emily, Camilla, Edith, Miller, James, Jazmine and Jenae, and many nieces and nephews and cousins.
She was predeceased by her husband, Chris, her parents, Lester and Mary, mother and father-in-law, John and Anne, brother, Leslie, sister-in-law, Joanne, brother-in laws, Walter, Allen, Conrad, Ralph and Jake and niece, Janice.