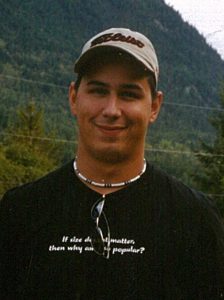 Randy Carl Every passed away in Royal Inland Hospital, in Kamloops, December 6, 2018 at the age of 38 years.
He was born in Salmon Arm and raised in White Lake where he remained until he moved to Salmon Arm and started his family in 2002.
Randy loved his friendship with the world and journeyed down many adventurous avenues.
He was a sharp tradesman that had ideas beyond the norm.  Randy and Crystal brought to life Diamonds Boudoir Studio and Salon and his art of photography quickly earned him an exclusive photo shoot for the 2012 Sturgis North Calendar.  He owned a mobile carpet cleaning business and a car detailing shop.
For a time but his heart never leaving home, Randy set out to the Alberta oil fields where he trained on heavy haulers, tried the landscaping trade and eventually returned to BC after the oil field crash.
Randy will forever be remembered by the hundreds of people he knew, his family, friends and acquaintances, as being a super generous, giving, caring man with a joy of heartfelt meaning.  Randy loved his daughter Jessica and his two special stepsons beyond imagination.  He cherished his family, nephews, nieces, cousins and his lifelong friends.
Randy will be deeply missed but shall never be forgotten.
Randy is survived by his parents, Bryon & Rita Every, brother Owen (Andy) Every, daughter Jessica Every, soulmate Crystal Millwater, stepsons Gauge and Dexter Stewart, aunties and uncles, Louise (Charles) Smith, Vinny (Pearl) Every, Ed Every, Patty Every, Lianna Katsios, Marla (Warren) Drader, niece Hailey Every, nephews Elijah, Treason & Nathaniel Every, Skylar Lilley, cousins Andria & Garth, Janine, Ryan and Cole, Jacqueline, Natasha, Cassandra, Christopher, Timmy, Zack and Emily as well as numerous relatives in the USA.
A Celebration of Life will be held on December 22, 2018 at 1:00 pm at the White Lake Hall.  Memorial donations in Randy’s name may be made to the Vancouver Canucks for Kids Fund. Online condolences may be sent to Randy’s online Celebration of Life Facebook page.