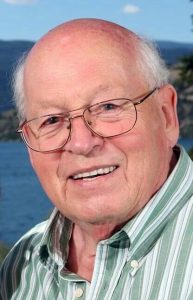 There will be a celebration of Bill’s Life on Sunday, June 9, 2019 at the Shuswap Community Church at 2:00 pm

The Family of William George Friesen (Bill) are heartbroken to announce his passing in the early morning hours of May 31, 2019, at Shuswap Lake General Hospital.
Bill Friesen was born on January 11, 1934 in Speers, Saskatchewan, the third youngest of nine children. He moved to Mission BC as a young boy with his family. At the age of 5 he had an accident playing with his cousin which caused a lifelong hip injury that he silently suffered with all his life. In the late 1940s Bill began his lifelong career with Canada Safeway. In 1950 he met Clare Pankratz and after dating for five years they married in 1955 and were just three weeks shy of their 64th wedding anniversary. Between 1959 and 1963 they had four children, the youngest being a set of twins. When the twins were just 18 months old in October 1965 the family moved to Hamburg Germany, where Bill went over with Canada Safeway to open the Safeway stores there. The family lived there for almost 2 years and then moved back to Canada and settled in Burnaby where Bill continued a very successful career with Safeway and where their children were raised. Bill was known to be strict but always fair and kind, never forgetting a name or a face. Upon early retirement Bill and Clare moved to Armstrong and settled there, having fallen in love with that area during a one-year transfer in his career. They built a new house, travelled extensively and became grandparents to six grandchildren, who along with his yard work were always his passion. In later years they moved to Salmon arm as his hip struggles kept him from being as physically active as he would’ve liked. He stayed active however in every other area of his life, he never forgot a birthday, and he was diligent at keeping in touch with family and friends via email, phone calls, birthday cards etc. He always remained very active with their local church even though he was immobile for the last five years of his life. His love and devotion to his wife is a tender example that he set for his family, right up to his last evening on earth from his hospital bed. His life and dedication to his Saviour and his wife and family and friends will not be forgotten. He is now with his Heavenly Father and free from all pain, and for that we are so thankful.
He was predeceased by his son Vincent Ross Friesen on May 13, 2011.
Left to mourn him are his wife of almost 64 years Clare FrIesen, daughter Dayle Kiesenwetter (Tom), daughter in law Debbie Friesen (Ross 1961 – 2011), son Craig Friesen (Laurisa), daughter Merle Cumbers (Ray), and his beloved grandchildren Jeffrey, Ashley, Jaclyn , Jamie, Cole and Derek.
Our family wishes to thank and express our gratitude to Dr. Goldberg and the amazing nursing staff on the fourth floor at the Shuswap Lake General Hospital, who diligently, with smiles did their sometimes extremely difficult jobs.
There will be a celebration of Bill’s Life on Sunday, June 9, 2019 at the Shuswap Community Church at 2:00 pm