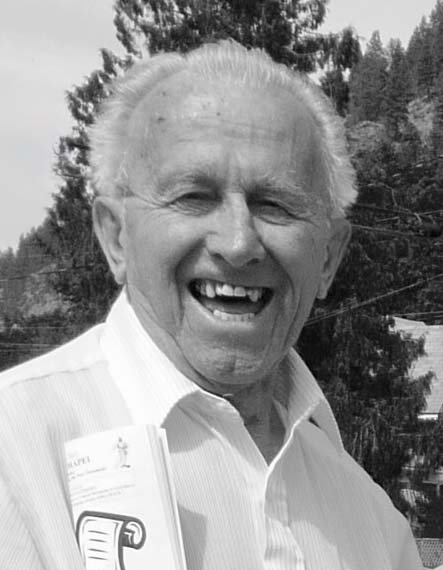 Harold Dietrich Funk died peacefully October 17th  in Salmon Arm, BC with his daughters by his side.  At the age of 95 he lived a very full life enriched by his constant sense of adventure and curiosity.

He is survived by his siblings Ken Funk and Carolynn Smith, his four children Cheryl, Lynn, Ian and Les, his grandchildren Patricia, Brian and Andrea, and his great grandson Thomas. He is predeceased by his siblings Rodney, Les, Paul, Darlene and his beloved wife of 63 years, Phyllis.

Born in 1927 in a Mennonite farm community in Morse, Saskatchewan, and as the oldest of seven children, he had a strong sense of responsibility to family and community. He developed deep rooted socialist beliefs which were reflected in his activities through church and community groups. He met his wife at South Hill Baptist church where they attended youth group together and sang in the choir. As a shop teacher they raised their four children in Surrey, BC on a hobby farm, and retired to Grand Forks, BC to be close to his mother and siblings.

He shared his love of nature and community with everyone. His hobbies included singing in three choirs, being active in St John’s United church, attending concerts, farming, and participating actively in community groups, including the peace movement and the NDP. As a keen enthusiast of physical fitness he rode his bicycle into his 80s, and attended Aqua Fit till his 90s.

He was an early advocate for the environment so in his memory we will turn out our lights more often, run the water a little less, walk more, and eat all the food on our plates.

Family would like to extend their appreciation to everyone in Grand Forks, BC at St John’s United church, and Silver Kettle Village, and in Salmon Arm at Hillside GSS for all their love and support.

A celebration of life will be announced at a later date.

In lieu of flowers please make a donation to any group you feel would honour Harold’s memory.