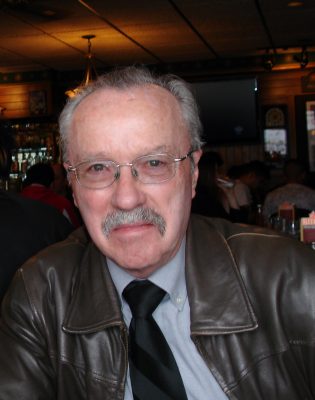 It is with deep sadness that we announce the passing of Jim on Sunday, September 27, 2020 at Polson Special Care Facility in Vernon BC. He is survived by his wife Donna, his daughter April Goodwin-Smith, his sister Gwenn Campbell (Frank), his brother Ted Goodwin (Joeanna), and his many nieces, nephews, grand nieces and nephews, and great grand nieces and nephews.

Jim was born on February 20, 1934 in Ryley, Alberta to Jack and Myrtle Goodwin. He was the seventh of eight brothers and sisters. After attending schools in many small towns in Alberta and Saskatchewan, Jim graduated from Surveying and Drafting from the Southern Alberta Institute of Technology (then known as The Provincial Institute of Technology and Art) in Calgary in 1952. He worked in Edmonton with a land survey company, surveying well-sites and assisting in the construction of the hangars at Cold Lake Airbase in North Eastern Alberta. He next worked with the City of Calgary, and while in Calgary married his wife Donna (1954) and welcomed daughter April (1956).

In 1957 Jim moved his family to Penticton where he secured a job with Ford, Bacon and Davis, the contractor for the natural gas line being built all across the BC interior. Then he was hired by Inland Natural Gas when the new company formed. Jim worked and travelled wherever the gas line was built. During that time, he and his family lived in Penticton, Kelowna, Penticton again, Kamloops, Trail and finally Vancouver. In all locations he was involved mostly in the measurement department. He was with Inland when it changed to BC Gas and then to Fortis. After 35 years with the same company, Jim retired in 1992. Jim and Donna moved to Tappen by Salmon Arm where they spent a few years building their dream home. Jim enjoyed working with his hands, building houses and furniture.

In Penticton, Jim participated in Toastmasters which sponsored the first timed Float Race down the Penticton canal, including a River Queen (one of the members in drag) on the first floating platform. In Kamloops Jim was involved with the Society of Engineering Technologists of British Columbia, working to clarify definitions and foster recognition of the members. In Trail Jim was an active member in the Rotary Club – even sponsoring an exchange student, who remained a lifelong friend. In Tappen, Jim volunteered with the Sunnybrae Fire Department Board, the Community Hall Association, and he was a sound man for the monthly Sunnybrae Coffee Houses. His last volunteer role was with the Sunnybrae Water System, bringing it up to standard to be assumed by the CSRD.

In 2017, Jim and Donna sold their house and moved into Salmon Arm. In 2018 Jim’s Alzheimer’s had progressed to the point where he needed more care. Since then most of his time was at Polson Special in Vernon where he was treated with respect and loving care.  Jim was a soft-spoken man, with a loving gentle nature, who was loved, trusted and respected by his family, friends, and colleagues. Jim is going to be very missed by his family and friends.

Because of COVID, there will only be a very small family gathering at this time. A larger memorial will be held when larger gatherings are permitted again.  Instead of flowers, please send a donation in Jim’s name to Vernon Jubilee Hospital Foundation. https://vjhfoundation.org/