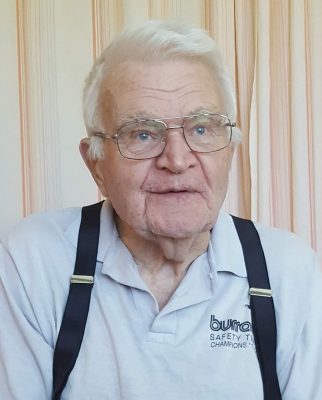 Bob passed away peacefully on April 28th, 2021 at Shuswap Lake General Hospital with family by his side. Bob was pre-deceased by his mother Lily Carney, step-father Marshall Carney, step-mother Dorothy Groat, and father Harry Groat.

Bob was born in Coleman, Alberta on April 3rd, 1934 to Harry and Lily Groat. At 4 years old, the family moved to 18 acres on Peachy Hill in Canoe, BC. Bob’s father built a log cabin for them to live in. Bob raised his own family in the same cabin and it still stands today.

Bob leaves behind his wife of 61 years, Jean who resides at Hillside Village. It was hard for them living apart, but they made it work. Bob is also survived by his children, Tom Groat, Judy Hall (Steve), Ken Groat (Christine), and 4 grandchildren, Jonathon Hall (Ria), Daniel Hall (Carol), Brittany Albery (Graham), and Nicole Hall (Connor). Bob was very proud to meet his first great-grandchild, Millie Hall, last summer.

Bob had a long career in the forest industry. He first worked at Melpass sawmill in Enderby, where he met his future father-in-law, Bob Chamberlain. He then worked in the bush for Ross Graham in Sicamous setting chokers, peeled logs at Bell Pole, worked the green chain at Shuswap Timber, and then worked for many years at Federated Co-op before retiring.

Bob’s preferred place to be was in his garden that he loved. He loved going hunting with his friend Jack McCoy and fishing with Yosh Takahashi – even though he was afraid of water and never learned how to swim. Bob also liked long visits and coffee with his friend Karl and reliving the old days with Ed Fuller. Bob enjoyed many conversations and time well-spent with his good friend and neighbour, Maurice.

Bob’s favourite thing to do was have a bonfire in his yard. He enjoyed watching the fire and sitting peacefully with a coffee.

Bob’s faithful cat, Lily, slept on his bed every day until he was moved to the hospital. She is safely with a family next door and will always be close to home. Thank you to all of the kind neighbours in the park who always checked in on Bob and were ready to help when he was alone.  You know who you are, and Bob’s family will always appreciate your kindness.

A special thank you to the palliative homecare team who looked after Bob three times each day for the last 10 months. It was very important for Bob to stay in his home as long as he could. Thank you to the palliative care team, Dr. Breugem, and on-call doctors at SLGH. They were all so kind and ready to meet Bob’s needs. Bob’s last few days were spent with family by his side and his wife, Jean, holding his hand. He enjoyed hearing jokes from Judy, Steve and his grandchildren. His biggest smiles were at videos of Millie laughing. Bob will be dearly missed by those who loved him.

A funeral service will be held at Fischer’s Funeral Home on Saturday, May 29th at 11:00 am.  Due to COVID 19 pandemic protocols, seating will be limited to 9 guests.