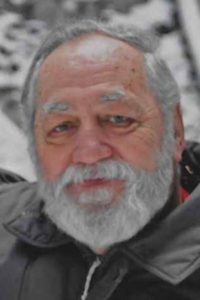 Anthony William (Tony) Hack passed away quietly on May 6, 2018, surrounded by those who loved him. Tony was predeceased by his wife Sarah and eldest son Derek.
He is survived by Joyce Shannon, his partner of seventeen years, son Stephen and wife Melanie Hack, daughter Lisa Hack, as well as grandchildren Michael, Daniel, Peter, Tessa and Jessica Davies, and also great grandson Michael Davies.
Tony was born in Lyndhurst, England on November 30, 1937. His family emigrated to Canada after the Second World War. As a young man Tony did a short stint in the RCAF and worked several jobs to support his young family. There is an oft repeated family story he once worked all 365 days in a single year.
Married to Sarah in 1958, the family later moved from Ontario to BC in 1967 where Tony began a career with BC Hydro, starting as a serviceman in Shalalth, eventually working his way up to Superintendent while moving throughout the province. BC perfectly suited his profound love of nature, which he shared with his family along with his interest in rock hounding, bird watching, and his passion for music, particularly classical.
After retiring in Campbell River, Tony moved to the Shuswap, which became his final home. He joined the Masonic Lodge and also spent time volunteering for the Red Cross and the Cancer Society.
Although a quiet and private man, Tony was a natural and gifted storyteller with a quirky sense of humour. He loved to catch people off guard and when he succeeded a loud and hearty laugh would ring out.
There will be no service as per his request. Remembrances may be made in his name to the Canadian Red Cross or the Canadian Cancer Society.
Tony was a beloved Dad and partner who is dearly missed.