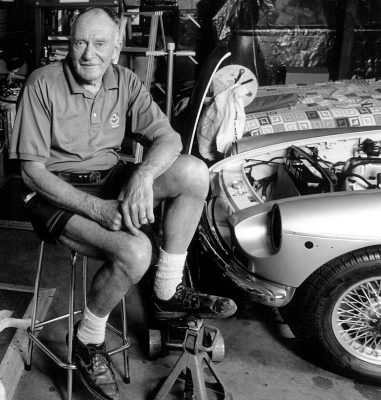 Lofty passed away peacefully at Hillside Village on May 2 at the age of 87.

Survived by Doreen, his loving wife of 54 years, and will be lovingly remembered by his family; Murray (Claire), Colin (Debbie), Allison (Tom) and his grandchildren; Johnathan, Hayden, Amelia, Scarlette, Drew, Audrey and Ayla.

Lofty was born in Polperro, Cornwall, England, May 18, 1933. He served as an R.A.F. mechanic in Iraq for 3 years then moved to Capetown, South Africa where he met Doreen, married and started their family. They moved to Canada in 1976 where he started his own mechanic shop “Globe Auto Services” as owner and sole operator.

He was involved in Scouts Canada—1st Salmon Arm Troop. He also belonged to the Okanagan British Car Club and founded the Shuswap British Car Club. Later in life he joined the Pioneer Club.
In lieu of flowers, as per Lofty’s wishes, please donate to the Shuswap SPCA.

Many thanks to the doctors, nurses and care aids who looked after Lofty in his final years.