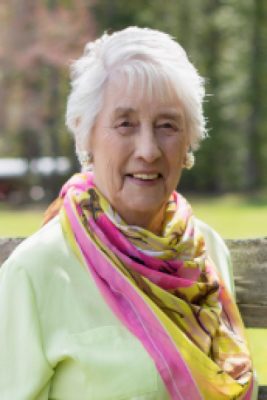 Born on June 02 1928 in Vernon to Caroline Emily Wood (nee Wood) and Bernard “Barney” Percival Wood. June’s two brothers, Arthur and Andrew, both died at a young age. From 1910-1943 the family homesteaded in Ewing’s Landing on the Westside of Vernon BC. In 1944 they moved to Powell River and in 1949 June married William Robert (Bob) Harper. Bob and June eventually settled on the Sunshine Coast, Frances Peninsula in Pender Harbor, BC, with their two young children, Barb and Don, where they ran a marina and store.
June’s love of horses began when, as a child, she eagerly rode Flossy ten miles to her one room schoolhouse. June worked after high school at the Soda Fountain and years later in Buckerfield’s in Powell River. Living in White Rock, she ran the Pop Shoppe, taught Mixology at BCIT and loved working in local pubs.
Years later June began a new life with Fred Mueller, assisting with bookkeeping for Fred’s Tsawwassen Husky Station. They built their dream log home at Gardom Lake, BC, enjoying their retirement life fishing, gardening and entertaining neighbors, relatives and friends down at the fire pit. Many grandchildren have fond memories enjoying summers at the Lake.
After Fred’s passing June resided in Nanaimo, BC, but after 5 years returned to the Shuswap. Her involvement in TOPS carried her from White Rock to Nanaimo and Salmon Arm. She volunteered in the kitchen at the Seniors Centre and assisted seniors in downtown Askews with the Monday Morning Market. June lived her final years to the fullest, reading paperbacks, playing Bridge and continuing her compassion and love for her last mini-pin dog while residing at the Lakeside Manor Residential Care.
June leaves behind her daughter Barbara Harper, son in-law Brian, son Donald Harper, his partner Cheryl, brother-in-law Earl Logan and many nieces, nephews and grandchildren.
Thank you to the many friends and family, especially her niece Heidi Schelb Fackler and husband Reg, for their amazing care and support during June’s final journey.
It is necessary to postpone a Celebration of Life until a later date. In lieu of flowers, a donation to a Horse Refuge or the Salmon Arm SPCA would be greatly appreciated.
June’s sense of humor, hospitality and that twinkle in her eyes will be missed but never forgotten.