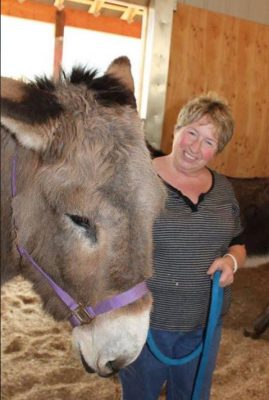 Christina (Chris) Harris (aged 68 yrs.) passed away January 13 at the Salmon Arm general Hospital after a brave, courageous but painful battle against a very aggressive cancer.

Chris is survived by her loving husband Tom, two sons John (Becky) Brooke and Brent (Danielle) Auria, also siblings Kathy (Wes), Nancy (Steve), Mike (Deb) and numerous nephews, nieces and their children and many other relatives and friends she knew during her life.

Married in Vancouver in 1974 Chris moved to Valleyview, Alberta to be with RCMP husband Tom. Later after their sons were born, they lived in Killam, Morinville and St. Albert, Alberta.

In 2009 after husband Tom had retired Chris who was an Edmonton accountant semi retired and they moved back to BC. (Blind Bay) She retained some Alberta clients and continued to provide them accounting services from Blind Bay.

Chris loved animals both small and large. Approximately 11 years ago Chris visited the Turtle Valley Donkey Refuge near Chase, BC. She fell in love with the gentle and loving donkeys and volunteered to help the owners/ founders in whatever way she could…. accounting, fundraising and donkey care and was passionately involved with the refuge until her death.

Chris always enjoyed sewing and joined some of the local quilting groups and over the years crafted numerous beautiful quilts for herself, family and friends. She enjoyed her time with the quilters and made numerous great friends…

Another joy in her life was spending as much time as she could with her granddaughter Auria in Blind Bay.

Chris and Tom loved to travel and over the years together they were lucky enough to travel to many exotic locations in the world.  On a few occasions they traveled with friends and relatives and had many exciting fun-filled vacations. Her favorite destinations were in Mexico, and most favorite city to visit was Las Vegas Nevada….

Chris really enjoyed movies and almost every Saturday afternoon her and Tom could be seen at the Salmar Grand theater in Salmon Arm.

Chris will be greatly missed by her family and friends.

Chris’s wishes were for cremation, no service, no flowers or cards but instead should you wish donations to the Turtle Valley Donkey refuge would be appreciated.