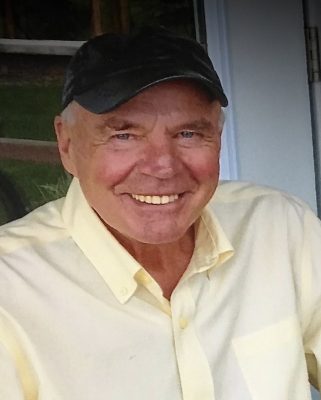 If you knew Don, you knew that smile and that he was always quick to give you one.  We said good bye on March 17th as Don passed peacefully, ending a brief but valiant battle with cancer.  Don was the 3rd son & twin (Doug) born to Raymond & Leona Hemeyer, in Ponoka Alberta.  Survived by his brothers, Dennis(Maggie) , Robert “Bob”(Anita) & twin Douglas “Doug” (Carol),  His wife/best friend Gail, their two children Art (Chantal), Lorelei (Rick), grandchildren Byron, Braedon, Brienna and Desiree. Nieces Jackie, Brenda, Nephews, Micheal, Brent, Wayne, Kevin,
Don was born into a family of farmers,  where his love of the land began.  He had a green thumb and could turn bare land into a a beautiful yard , with green grass & fruitful gardens. Don grew up on the farm but decided at an early age, that he wanted to see more. One of his first jobs was at a lumber yard, that was the start of a long career & many moves with Beaver lumber.  Medicine Hat, Milk River, Rimbey, Prince George, Russel & Dauphine Manitoba, Leduc, Forestburg, Ponoka, where he and Gail moved to her family homestead, but Don was restless again… Grande Prairie, Berwyn, Salmon Arm, Edmonton, Kelowna and finally Salmon Arm again.  During his travels he gave up Beaver and tried a number of things, sold insurance, worked for the Alberta government, owned a convenience store & restaurant, managed a jewellery store, worked at Home Depot, then semi retired working part time for his son at Arthur’s Gemset Studios. He built and reno’d houses along the way, always making a house a home. If you spent the day with Don, you would be offered a beer, share some laughs and hear some pretty fun, crazy stories of his youth, the farm & amazing friends he’s made along the way. Wherever Don & Gail lived they made life long friends . As “Grampa” he had a playful side and loved to shock his grandkids with his humor, they were the “apple of his eye” and he loved spending time with them, teaching them & always making them laugh.Don was loved by many & will be terribly missed… we can be comforted knowing he is in a paradise riding his mower through a field of beautiful green grass, a beer in his hand,  a smile & sunshine on his face. The family will have a memorial at a later date. A special thank you to Dr. Heunis & the palliative care nurses at Shuswap Lake General Hospital.