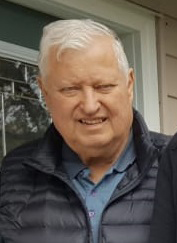 With his wife at his side, Jim Horkoff died peacefully at the Shuswap Lake General Hospital in Salmon Arm on October 20, 2019 at the age of 76 after a very short battle with Leukemia. It’s with much sadness to his family and friends that Jim passed so quickly but knowing that he did not suffer is a comfort to hold on to.
Jim was born in West Grand Forks on August 22, 1943 to Bill and Mary Horkoff.  After moving to Vancouver to take up his trade as a carpenter and builder, he relocated to Zeballos, BC where he met his lifelong love Renske, to whom he remained married for 54 years. He started and raised his family in Campbell River, BC and finished the final phase of his career working for Interior Health as a project coordinator in Cranbrook and Salmon Arm.
Jim enjoyed listening to classic country music and reading western novels. He loved working with his hands and operating machinery and tinkering with the latest electronic gadgets provided him with much enjoyment. Socializing with friends and family was very important to him through his whole life and starting his own or helping others with various home projects gave him much satisfaction.
Jim is survived by his wife Renske, his son David, his daughters Jennifer and Crystal, his step daughter Karmen, his grandchildren Hayden, Naomi, Jade and Anya, his brother George and his sister Pauline and their families. He is predeceased by his brother Billy, his parents Bill and Mary, his son Gordon, his brother-in-law Walter and his sister-in-law Patsy.
The family would like to extend a deep thank you to the hospital staff at Shuswap Lake General Hospital, and particularly to Dr. Bonthuys and Dr. De Wet for their care in Jim’s final days.
In Jim’s memory, please donate to your favourite charity or to the Shuswap Hospital Foundation.