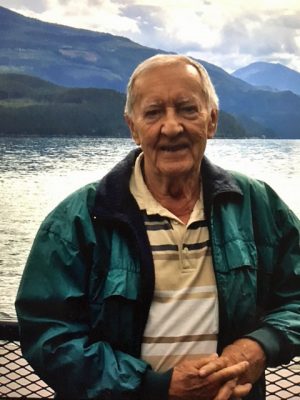 Jiri (Jerry) Hubicka, 81, passed away peacefully early morning May 2, 2021 at Shuswap Lake General Hospital in Salmon Arm, BC. The doctors and nurses who looked after Jiri showed so much compassion and humanity. Our family was moved by their grace. We simply cannot thank you enough.

He is survived by his loving wife, Sharka Jarmila Hubicka (nee Tajdusova), his loving sons Marek and Richard, his loving daughter-in-law Iris Enkurs, amazing grandsons Eric, Jared and Kyle and his brothers Zdenek, Oldrich and Jarek.

Jiri was the first child of four boys in a very musically talented family on his father’s side. At the age of five, he was almost killed by a stray bullet that grazed his upper lip when German and Russian troops were fighting in Czechoslovakia at the end of WW 2. He grew up in post war conditions that gradually improved as time went on including more and better food. He excelled in school helped by a photographic memory and was a great soccer player eventually representing Svinov. He loved dancing and was a part of a dance troupe that travelled the Eastern Bloc Communist countries. Jiri was like a father to his youngest brother Zdenek  who was 14 years younger.

He served in the Czechoslovak Army for over two years as a communications specialist where he met lifelong friends. After his military service he married Sharka and had a son, Marek.  Jiri and Sharka bravely escaped the communist regime in Czechoslovakia in 1968 with their three-year-old son Marek to seek freedom and a better life. The family emigrated to South Africa when Jiri was 28 and son Richard was born in Pretoria in 1969.  Jiri supported the family by working as a millwright in various gold mines for many different companies.  Jiri and Sharka bought their first car and learned to drive in South Africa.  Always seeking a better life for us, we lived in South Africa for about 5 years moving around the country following job opportunities. Then a move to Norway for a year and back to South Africa. In May of 1974 the family emigrated to Canada and lived in Edmonton.  After discovering BC, we moved to Surrey for four years before moving to Ardrossan, AB. Jiri and Sharka retired to beautiful Blind Bay, BC in 2000.

Jiri was an incredibly devoted husband and father. He loved us and gave us a lifetime of love, experiences and travel. He was the stable rock and guide for our family, always giving us what we needed.  He had a passion for mechanical things and it seemed he could fix anything. Among his many hobbies he loved to read, especially nonfiction and he had a great book collection. He loved watching soccer. His favourite team was Manchester United but he treated us to the Vancouver Whitecaps home games for over two years.  He spoke Czech, Polish, German, Russian, Afrikaans, English and a local native South African language called Fanagalo. His command of the English language was better than most native speakers. That photographic memory sure is handy!  Jiri was an engaging storyteller and the highlights of his life mentioned above do not do justice to the adventure of a life he lived.

Tatko, you will be sorely missed. Thank you for everything!

Jiri was cremated May 5, 2021 at Fischer’s Funeral Home in Salmon Arm, BC. His remains are with his loving wife, Sharka.