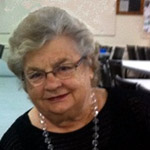 A Celebration of Life will be held Thurs. Oct.30th, 2 pm at the New Hope Community Church (Salvation Army), Salmon Arm.

On the evening of October 24, 2014 Esther passed away peacefully with family beside her at the Shuswap Lake General Hospital.

Esther was born in Middle Lake Sask. in a two-room sod house. Esther was quiet natured, hardworking, honest, compassionate and generous. She had a passion for cooking, entertaining, fashion and shopping. Her interests included country music, shopping and the Canucks. Above all Esther’s greatest love was reserved for her family. Her greatest joy in life was her children and grandchildren. She will be deeply missed.

The heavens have opened up and Jesus has her in his loving arms.