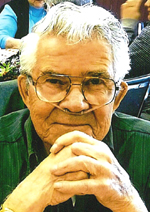 It is with profound sadness we announce the passing of our beloved husband, father, grandfather and brother on May 25th, 2015 at the age of 82 years.

John was born in Lacombe, Alberta, April 10th, 1933. He is survived by his loving wife of 58 years, Verna, his son Gordon (Debra), his daughter Karen and grandchildren Allyssa and Brandon Jones. He is also survived by his brothers Albert and Robert, and sister Muriel, and their families.
He was predeceased by his parents Barbara and Christopher Jones. John and family moved to Salmon Arm in 1965 where he was employed for a short time at Federated Coop before moving to work as a steam engineer at Canadian Safety Fuse (now Orica Canada) in Tappen, BC. He was employed there until his retirement in 1993.

John loved to camp, fish, grow flowers and play cards. His love of children led to his coaching Little League Baseball; allowing car motors to be rebuilt in his garage, pick up trucks to be washed on his front lawn and musical instruments to be played in his basement with his pool table being used as a music stand.
After retiring he spend much of his time creating woodworking projects for his family.
John enjoyed people, jokes and a good laugh; and the family home was usually filled with friends and laughter.

The family would like to thank Dr.’s McClelland and Levins for their special care and encouragement during his long fight with COPD.
At John’s request no service will be held, however, friends are invited to the family home at 2435 – 5th Ave. NE, Salmon Arm for a gathering in his memory, on Saturday, June 6th, 2015 from 1-4 pm.