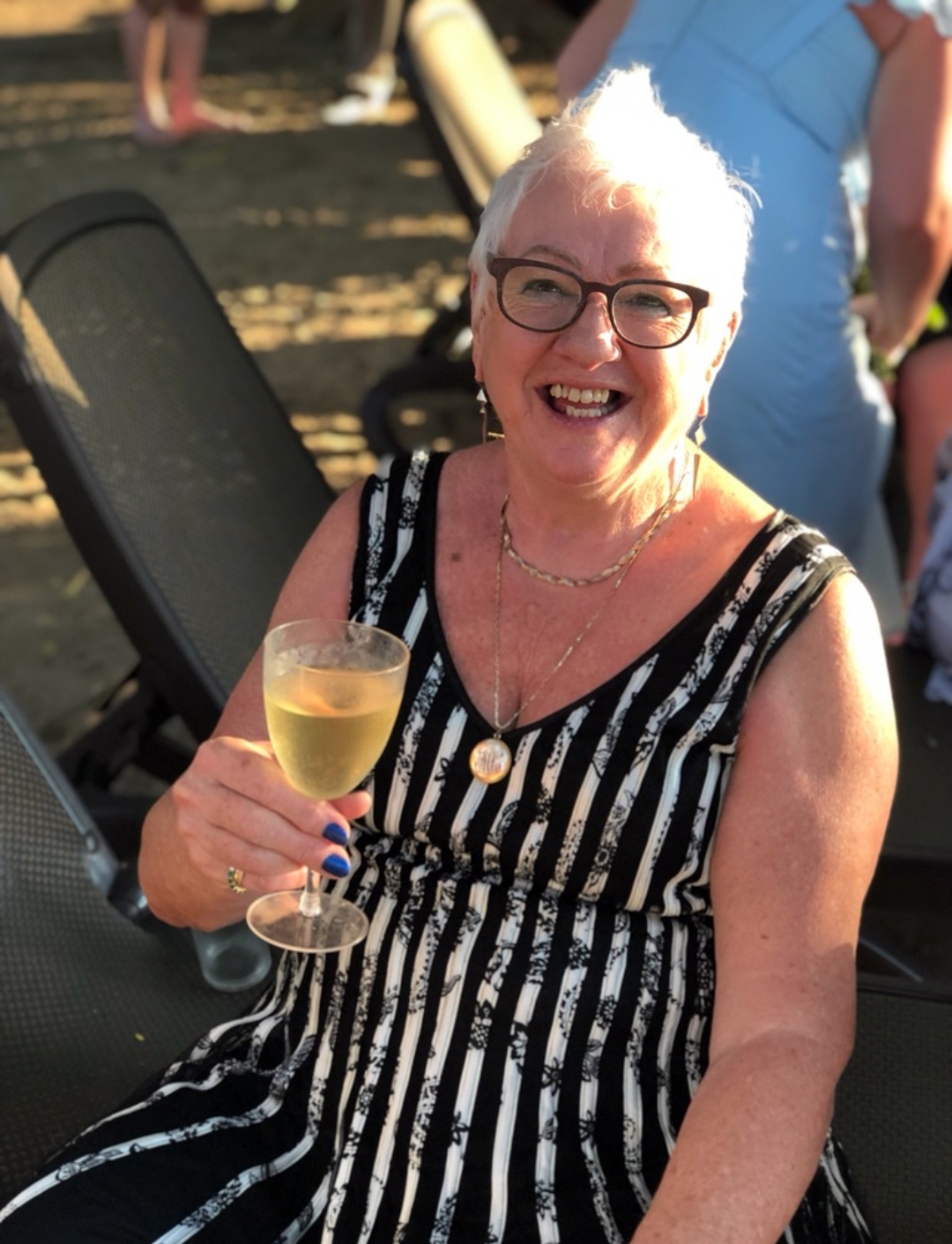 Kaye (Carolyn) Anne Joyce (Kelly) was born in Kingsclear, New Brunswick on May 8, 1942. She passed unexpectedly Saturday, November 5, 2022 in Salmon Arm, BC.  She was the 10th of 11 brothers and sisters. She went to elementary school locally and took the school bus to Fredericton for junior and high school.

Kaye was brought up on the family farm doing her share of chores such as milking cows, looking after chickens, pigs and all the other daily chores.  As she got older, she would go hunting at night (jacking) with her brother Bob hoping to get a deer to put on the menu. She and her sister Sharon would also spend time on the farm horses running in the fields around the farm.  As Kaye had older sisters, she spent time baby sitting and looking after lots of nieces and nephews on many occasions.  Both she and her sister Sharon spent many summers in Hillsborough with her sister Neen and Charley.

Kaye went to work in Fredericton in the K-Division RCMP offices as a secretary and then as a legal secretary.  This is where she met her man Mike who at that time was going to Maritime Forest Ranger School. Mike would hitchhike out to the farm on weekends and the romance continued.  In 1962 Mike went to Labrador for employment. He came back to Fredericton and they were married on September 9, 1963. After a very short honeymoon…the trip back to Labrador, they settled in Schefferville. Kaye had a job working for the company in Ore Testing. During this time Kelly and Michael were born.

In 1972 they moved to another mining company in Leaf Rapids, Manitoba. That was good for a year and then the adventures began.  In the fall of 1972 a long trip with 2 kids to Western Australia and a small mining town called Pannawonica. We were on the company plane getting ready to land at Pannawonica we looked at each other, not a word was said but the question in both our minds was what have we got ourselves into. Ultimately, it was great experience. We made some good friends and our youngest son Jamie was born in 1976.  We left Australia in September 1977 heading to Ontario with a pile of luggage and 3 kids. We had a short visit with my sister and her family and then headed west.  We stayed for a few months in Vancouver and then moved north to Prince Rupert.  Kaye had a job as a legal secretary, I was working for the Fisherman’s Coop. This lasted 2 years and then we got transferred back to Vancouver, living in Maple Ridge.  Two years later we moved to Grande Cache, another mining town where we stayed 8 years. Kaye worked at BCFP in payroll. Kaye was instrumental in establishing the Grande Cache Transition House, a short-term shelter for women.  We did lots of camping, the kids were growing up and in 1988 it was time to move again, this time to Spruce Grove.  We lived in Spruce Grove and Kaye opened a leather goods business in downtown Edmonton and with the help of Kelly she ran this business successfully for 19 years. She was also involved in the Royal Glenora Rotary Club.

She also became very involved in Breakfast for Learning program which supported breakfast for students across the country. She was instrumental in the start-up of the Alberta branch and was chairperson for a number of years. She was on the national board and made numerous trips across the country and all over Alberta in support of this program.  In about 2008, Kaye closed her business, I retired and it was now time to travel.  We visited Ireland, Italy, Spain, Japan, Costa Rica seeing more of the world than Kaye could have imagined and then became snowbirds going south to Arizona for the winter.  We sold the house in Spruce Grove and bought a truck and trailer which she had always wanted to do. **This is how I remember it…the children remember it as Kaye finally capitulating to my life long dream***… She enjoyed pulling the trailer, stopping at different places then setting up for the next 5 months. She liked the solid dirt under her feet. She really enjoyed our trip pulling the trailer across the USA. She loved the music in New Orleans, stopping in New Brunswick to visit family, then across Canada and back home to Alberta. She was not nearly as fond of the civil war museums as I was but indulged me.

Setting up at the lake in Salmon Arm was a bonus as she enjoyed her gardening, painting and just relaxing with a wine at the fire. The lake became a gathering place for the family in the summers, with much laughter. Kaye liked having the activity around her which she could participate in, or just listen to.

Kaye’s love language has always revolved around food and entertaining. As an amazing cook and baker, family gatherings involved copious amounts of food and the family joke of having to stop at McDonalds on the way home as we were going to starve. Menu preparation began weeks before each gathering and there was always more than enough food. You never went hungry at Kaye’s and that tradition is being carried on by her children and grandchildren who are good cooks and bakers in their own right.

Kaye (Carolyn) Anne Joyce is survived by the love her life Mike, her children Kelly(Jon), Mike(Trina) and Jamie(Peggy); 8 grandchildren Kayla (Mike), Zachary (Ashley), Lainey, Noah, Taegan (Liam), Merryk, Addyson, and Sayleigh; and 4 great grandchildren Harlow and Jack, Vanessa and Paxton. Kaye is also survived by her sisters Helen and Sharon and numerous nieces and nephews who lovingly remember her as the beautiful, kind, hilarious and fun woman she was. She was our most beloved wife, mother, grandmother, great grandmother, confidant and most of all she was our champion. Kaye was the heart of our family. She had the ability to love unconditionally, make you feel that love, and fear the temper. She nurtured us body, mind and soul. All the markings of a true matriarch. We know she will be missed and celebrated by the many friends she has made. Nothing we can ever say will truly express the depth of feeling surrounding Kaye (Mom) and what she has meant to us. We just hope she knew.

A Celebration of Life will be held at a later date. In Kaye’s honour a donation can be made to Grande Cache Transition House by searching for this particular shelter  at the following link https://acws.ca/donate/