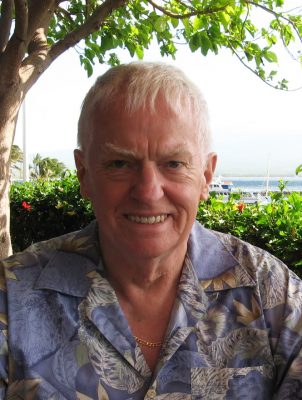 After 91 years sharing his intelligence, wit and charm with us, Arvid Earl Kendall passed away in Salmon Arm BC on November 26, 2021.

Arvid was born in Toronto ON on September 16, 1930.  After two years in the US Army he put his intelligence to work for 14 years with CBC Television in various capacities, followed by six years at UBC as head of the Audiovisual – TV Department, Biomedical Communications, then as Assistant Director of Educational Planning for the BC Medical Centre and a consultant to the Ministry of Education. Shortly after marrying wife Judy in 1977 they moved to Salmon Arm where he worked as Manager for the School District Resource Centre until retirement in 1996.

Arvid enjoyed film, music, literature and theatre. He sang in numerous barbershop and choral groups, and volunteered with many Shuswap organizations both before and after retirement. His movie collection was a delight for visitors and popcorn was always provided.  For many years Arvid and Judy took vacations in Mexico where he entertained the resort staff and fellow guests.

Survived by his loving wife Judy and children Vicki, Janis (Marcel), Robyn (Bob), Lori (Ron), and Dean (Melinda). He will be missed by grandchildren Melissa (Arthur), David (April), Nicole and Michael, as well as three great grandchildren. Arvid is also survived by two sisters in Ontario and numerous nieces and nephews.

The family would like to thank Dr. Keith Hepburn, the Shuswap Lake General Hospital Emergency Room, and the Covid Unit staff for their dedicated care. In lieu of flowers, donations may be made to the Shuswap Hospital Foundation or to Parkinson Canada.