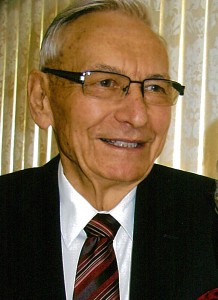 Herb Knull passed away peacefully in Salmon Arm hospital Sept. 1, 2015 at the age of 85.

Herb will be remembered by his loving wife of 65 years, Violet, and their son Terry and his wife Esther.  Herb will always be remembered by family and friends for his outgoing personality, his interest in people and his sense of humour.

He was born in Leduc, Alberta Sept. 15, 1929.  He was the youngest of 7 children. Over the years he had a few occupations including driving gravel truck from an early age to driving a school bus for 26 years.

He and Violet moved to Salmon Arm in 1983. Thereafter he drove the “BookMobile” for 10 years. His greatest treasure in life was his relationship with his Creator, Jehovah God. He was baptized as one of Jehovah’s witnesses June 25, 1953.

He always enjoyed talking to others about God’s purpose for the earth and he looked forward to the fulfillment of Bible prophecy such as Rev. 21:3,4.  He rests now in God’s memory until he is resurrected to enjoy foretold blessings on a beautiful, paradise earth.

The family would like to thank the staff at Shuswap Lake General Hospital and Dr. Bonthuys for their care of Herb during his many bouts of illness in recent years.