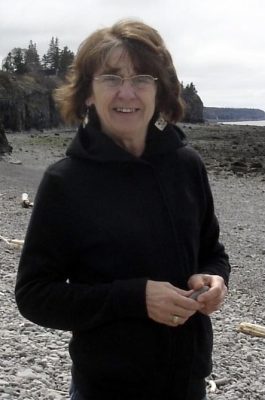 Beloved wife, mother, grandmother, sister and aunt, Colleen passed away at her home in Salmon Arm surrounded by her family. She is predeceased by her by mother Reita, father Jelmer (Jim), brothers Michael and Patrick and stepbrother, Wayne.

Colleen is survived by her loving husband Barry and children Penny, Clane and Britt, as well as many grandchildren, great grandchildren, nieces, nephews and an extensive extended family.

Colleen and her family had a unique upbringing as the family owned and lived in the historic Watson Lake Hotel in Watson Lake, Yukon.  Colleen actually met her future husband Barry at the age of 10 while living at the hotel.

Colleen and Barry married in 1978 and built a life together and raised their kids amid a loving extended family of true northern characters in the Watson Lake and Dease Lake area. In 1985, Colleen and Barry built the Downtown RV Park in Watson Lake which they owned and operated the business until 2000. After travelling, they settled in Salmon Arm, BC and bought ABC Storage in 2002 until they were ready to retire in 2015.

Despite her small statue, she was fiercely protective of her children and family and those close to her knew she was not to be fooled or underestimated.  Colleen had a big heart and was a fun person to be around with a quick wit and an easy laugh. She fought cancer with the same qualities and her strength and bravery are to be admired. She will be forever loved and missed.

Until we meet again

A celebration of life will be held at a later date and in lieu of flowers, please consider a donation to the Canadian Cancer Society.