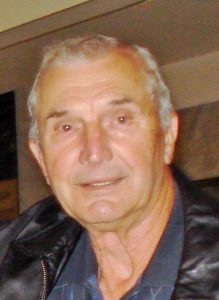 Len Kurta passed away peacefully on Friday November 30, 2018 in Bastion Place Care facility in Salmon Arm BC. Len was born September 10, 1933 in Granada, Alberta, the second son of Walter and Lena (Capostinsky) Kurta. After a short time in Toronto, Ont. Len’s mother moved the family to Salmon Arm in 1948. He attended school in Salmon Arm in the old Salmon Arm Court House building, graduating from Salmon Arm Jr. Sr. high school in 1952.
Len married Nancy Griffith in 1956 and together they raised their family of four children in Salmon Arm. Len’s career included logging and operating heavy duty equipment. His work took him to Alaska and various parts of BC including the Kootenays, Rogers Pass, Mica and Revelstoke dams and finally the Mt. McDonald tunnel. Most of his career was as an equipment foreman.
During his working years Len’s hobbies included hunting, fishing, family camping trips and traveling .Thirty years of retirement brought enjoyable time spent golfing, gardening, curling, hunting, fishing, cross country skiing and time with his grandchildren and great grandchildren, family and friends.
Len was predeceased by his parents Lena and Walter Kurta and his brother Eddie (1956). He is missed by Nancy, his loving wife of 62 years, son Robert, daughters Debbie, Carol (John) and Gail, brother John (Edwina), sisters Iva and Ella (Bob), brothers Rick and Ron,11 grandchildren and 7 great grandchildren as well as many nieces and nephews.
The family wishes to thank Doctors McKinnon and Weicker and the “angels” that cared at Bastion Place. Many thanks go to Len’s “buddy” Dick who regularly brought him three of Lorraine’s cookies with each visit.
In lieu of flowers, please donate to your favourite charity or the Shuswap Rotary Club of Salmon Arm, in Memory of Leonard Kurta.

He will be missed by his family and friends.