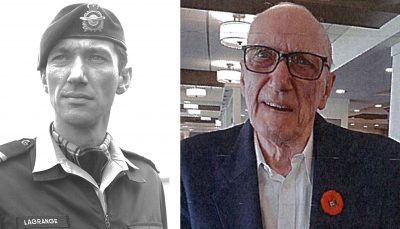 Ronald Albert LaGrange was born September 04, 1940 in New Westminster, BC to Albert and Theresa LaGrange and was the eldest of five children. His childhood home was filled with deep faith, music and the love of a large extended family. In 1958, Ron enlisted with the Royal Canadian Air Force and began what would become a 33-year life of service to his country.  In 1961, while posted in Gimli, Manitoba, Ron met the love of his life, Gail Sveinsson, on a blind date.  He told his friend that night, “That’s the girl I’m going to marry” and so he did, after a brief delay caused by the Cuban Missile Crisis necessitating an emergency posting to Germany.  In May 1963, he flew back to Canada, married Gail and whisked her away for four years to Germany where the first two of their five children were born.  They returned to Canada in 1966 and added another son to the family in 1967, and sadly lost another, Joseph, in 1969. In 1970, Ron became an original member of the ground crew of The Snowbirds, the aerobatic flying team.  In fact, he designed the smoke system used in ‘sky-writing’ that is still in use today.  In 1973, he accepted a commission from the ranks and was posted to Ontario, later followed by Cold Lake, Alberta, where a daughter was added to his family.  He was posted to Comox, BC and then to Winnipeg, Manitoba where he retired after the Gulf War as a Lt.-Colonel.

Ron had a very happy retirement in Tappen, BC where he was chiefly occupied by never-ending renovations.  He loved to design and build and was meticulous in his handiwork.  He and Gail loved to travel, particularly by car, and drove across Canada several times.  Having a son and his family in Prague, they also flew to Europe many times to watch their grandchildren grow and to sample the excellent Czech beer.  They also made a trip to Gail’s ancestral homeland, Iceland, to meet extended family and take in the magnificent landscapes.

Like his father before him, Ron was an honourable man. He was honest, hard-working and loyal. He loved his family with all that was in him, and he will be profoundly missed. A Memorial Mass will be held at some point in the future when travel and gathering restrictions have been lifted.