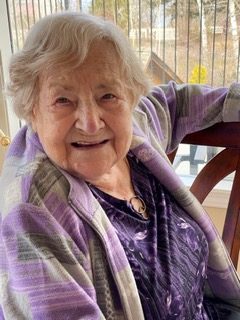 With sadness in our hearts, we announce the passing of Margaret Elizabeth Lemmer, wife of Josef Lemmer, mother to Michael (Brigitte), Mechthild (Joseph), Ursula (David), George (Vera).  She was also the grandmother to Stephan and Christopher, Luke, Andrew and Bianca, as well as Jennifer.

Margaret passed away peacefully on May 12, 2021 at her Home at Andover Retirement Community.  She was predeceased by her husband Joseph in October 2019.

Margaret was born in Neheim, Germany in 1931, where she attended the Theresien-School for 8 years.  It was her dream to become a Seamstress, but War-time did not afford the luxury of dreams.   At the age of 14 she started her 3 year apprenticeship in a small Grocery store.  She stayed on for another 2 years at which time she met Josef, who was working in Neheim in a Butcher shop.  They married in February 1953, and she moved to Bentheim, Germany to work in her husband’s new Business, which he had opened the year before.  Life for her was busy, as their four children were born between 1954 and 1957, as well as the daily running of the Butcher shop.  The House which they purchased in 1959 became their Home and the Location of their Business after extensive renovations with the help of Grandfather Johann Lemmer.

Two of Josefs Brothers, Heinrich and Christian were already established in Calgary, Alberta, so Josef and Family decided to join them there in 1967.  They started a small business which grew over the years into a large Butcher Facility and several Retail shops.

After their retirement in 1989, they moved to Blind Bay, BC, where they built their dream Home overlooking Shuswap Lake.  Margaret enjoyed travelling whenever possible and exploring new horizons.  But her artistic vein really emerged after her retirement, when she had the time to start new hobbies.  Painting became a large part of her life, allowing her to express her sense of beauty through this medium.  Her love of Nature and Flowers showed in every one of her creations.

At this time, we would also like to acknowledge the help Margaret and Josef received from the Staff at Andover Retirement Resort.  Without exception, the warmth and dedicated care they offered, made the final years so much easier.  A special Thanks to Grace, Paula and their co-workers.