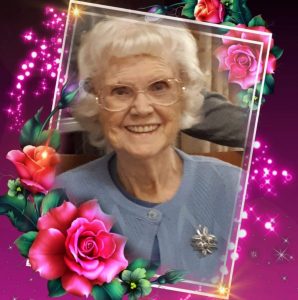 Else left us on March 3, 2019 at the Shuswap Lake General Hospital, Salmon Arm, just 3 weeks shy of her 92nd birthday.
Born in Denmark, March 26, 1927 to Nicoline and Axel Ranch.  Her parents traveled via ship to Canada from Denmark in about 1929, when Else was barely two and her sister Greta was four.
Else was predeceased by her husband Odin, daughter Susan, grandson Marlin, and brother Paul.
She is survived by sons Randy (Nella) and Tim (Deb), daughter Zara, grandson Aaron – grand daughters,Allison, Krystal and Melody. great grand children, Kyle, Dillon and Derek, several young great-great grandchildren, as well as two sisters Greta Wiffin in Florida and Miriam Swift, in Toronto, Ontario, with nieces and nephews around Canada and the USA too.
Else married Odin Lunden at the young age of 19 years, travelling from city of Hamilton, Ontario to the Northern town of Peace River, Alberta.   They had met in Hamilton when Odin was just out of the army, having served in WWII.
They lived on his farm in the Peace River area, located down the Weberville Road. There she experienced the many joys and hardships life had to offer people struggling to make a living in the county.  A city girl learning to be a farmer’s wife was very difficult for her at first.  She had nothing but praise and gratitude for the experienced country farm women who helped her learn and cope with the life.  Odin had a standing joke, that the first bread she baked was so hard, they used it as a foundation for the addition to the farm house they built.
She was an exceptionally talented artist, poet, writer, seamstress, musician and singer, as well as a very smart business woman. (Well read and educated in the East) Odin was very proud of her when she could fill in their own farm tax forms, understanding the legal side of things.  She also became an exceptionally good cook.  Her artistic talents extended to decorating many, many beautiful unique wedding cakes for friends and neighbours over the years.
Else and her husband Odin moved to the Okanagan BC, in 1991 for the warmer climate. Odin passed over in 2002 and Else continued to live in the area, her last two years at the very comfortable modern independent living for seniors, Lakeside Manor, Salmon Arm, BC.

An Ode to Grandma

Grandma, on a winter’s day, milked the cows and fed them hay, hitched the mule,
drove the kids to school…did a washing, mopped the floors, washed the windows and

Cooked a dish of home-dried fruit, pressed her husband’s Sunday suit…
swept the parlor, made the bed, baked a dozen loaves of bread…split some

firewood and lugged it in, enough to fill the kitchen bin…

Cleaned the lamps and put in oil, stewed some apples before they spoiled…
churned the butter, baked a cake, then exclaimed, “For goodness sake!” when the
calves ran from the pen, and chased them all back in again…
Gathered eggs and locked the stable, back to the house and set the table…
cooked a supper that was delicious, then washed and dried all the dirty dishes…
fed the cat and sprinkled clothes, mended a basketful of hose…then opened

the organ and began to play:  “When You Come to the End of a Perfect Day…”

A special Thank You goes out to the caring staff at Lakeside Manor for the exceptional care you provided to Mom over the past couple of years.
As per request, there will be no funeral service. Private family internment will follow in Chase, BC. Memorial contributions may be made to a charity of your choice.