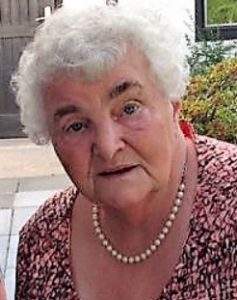 Juliane (Julie) Mailandt (nee Fischer) died with dignity on the 16th day of June 2018 at Salmon Arm, British Columbia after 25 years of peaceful retirement. She is survived and will be greatly missed by her husband of 68 years, F.H. (Henry), her 4 children, Ursula Duke (Garry), Karin Anderson (Rod), Hart (Jackie) and Werner (Pat), 10 grandchildren, 5 great grandchildren and numerous extended family in Germany.
After raising a family, she embarked on a successful instructor career at The Southern Alberta Institute of Technology from which she retired to a view of Shuswap Lake.
Thanks to the Staff at Bastion Place and Dr. G. De Wet from Salmon Arm for their gracious care of Julie.