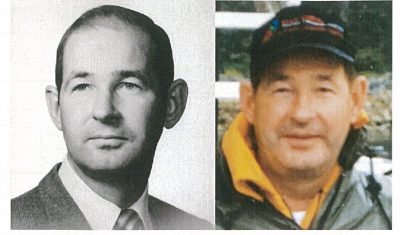 Charles Francis McCarthy, age 77, passed away peacefully on Friday, October 30, 2020 at Kamloops Seniors Village in Kamloops, British Columbia.  “Charlie,” as he was known, was a skillful forestry executive, amateur musician, and natural athlete. Throughout his varied life he was known for his love of song and sport, as well as his shrewd and analytical eye.

Born on January 23, 1943 in Maple Creek, Saskatchewan, Charlie was the youngest of Bart and Frances (née Harrigan) McCarthy’s two children. At the age of three, the family moved from their cattle ranch near Piapot, SK to Salmon Arm, BC. Charlie had fond childhood memories of helping with chores at the family’s auto court (motel and cabins near McGuire Lake), mowing lawns for spending money, and playing several sports including baseball, hockey, lacrosse, water skiing, and basketball. A high school basketball knee injury slowly worsened over time, eventually restricting him to recreational rather than competitive sports.

Charlie met Barbara Alice Dagneau (née  Bedford) in high school. They married shortly after finishing their studies at the University of British Columbia, Charlie receiving his Bachelor of Science degree. Their dancing skills remain legendary among the family. The young couple moved often while Charlie pursued a career in the forest industry, including to Sicamous, BC and Smith, AB, as well as a year spent travelling and working in the southeastern United States. They then settled in Salmon Arm and started a family, welcoming two boys. The family enjoyed many satisfying summers at their sparse but homey cabin on Shuswap Lake, where Charlie taught his sons to waterski, among other adventures.

Charlie was promoted to management positions at Federated Co-operatives’ Canoe, BC sawmill and plywood plant, eventually becoming Senior Vice President in charge of those facilities for many years during the 1980s and 1990s. He belonged to local service clubs such as Kinsmen and Rotary, as well as several forest industry associations. Significant health issues led to his early retirement in 1998, after which he and Barbara travelled by trailer across the southwestern USA. Following his divorce from Barbara, Charlie moved to Kelowna, BC, where he spent the next 10 years.

Charlie had an early and lifelong love of music. It was fostered by a piano-playing mother and older sister, and a father known for singing and memorized poetry recitations, skills that Charlie inherited. Charlie became an accomplished trumpet player during his school years. He returned to the trumpet more persistently in the 1990s upon joining Dixie North, the Salmon Arm-based Dixieland band with whom he played until well after his retirement. However, Charlie’s primary musical love and constant companion was big band jazz. Among the numerous jazz festivals and concerts he attended, he saw live performances of both his trumpet-playing heroes, Louis Armstrong and Maynard Ferguson. Despite health declines and a serious stroke in 2018, he never lost his love of music, rhythm, and singing. Charlie moved to Kamloops in 2019, closer to his sons.

Charlie loved his family and strove to support them to the best of his abilities, even during trying times. All who knew him will remember his carefree joy when spontaneously singing along to jazz, his famous annual St. Patrick’s Day dress-up celebrations, and countless other stories that will be recounted for years to come, as Charlie would have wanted. His family and friends will dearly miss him.

Charlie is survived by his sons Chad (Sarah) and Brook (Diana), granddaughter Alice, sister Dawna Dinning (Chuck), and Dawna’s sons Dean and Gordon. In light of the Covid-19 pandemic, a memorial gathering and Celebration of Life tea will be announced at a future date when attendance restrictions are relaxed.

The family would like to express its gratitude to Dr. Wynne and the caring staff at both Kamloops Seniors Village and Lakeview Lodge in West Kelowna, BC. Memorial contributions may be made to the Heart and Stroke Foundation of Canada.