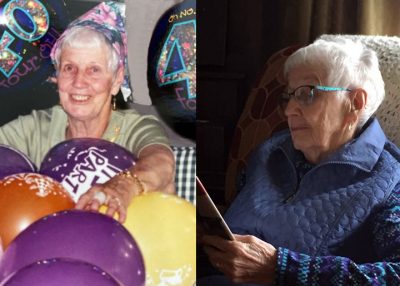 It is with great sadness and heavy hearts that the family announces that Joan McGill passed away on December 23, 2020 at her residence in Salmon Arm, BC in her 98th year.

Joan was predeceased by her parents Rose and George Bailey, husband Morley, son Lawrie and daughter-in-law Clare as well as her siblings Dorothy Fetterley, Bill, Fred, George and Hilda.

Mom was born and raised in Winnipeg, Manitoba and she shared many memories of her family life with all of us.  Mom worked for The Bay and Eaton’s upon completion of her school years.  Mom loved to dance and had many stories of she and her girlfriends going out to dances and, by the sounds of it, much fun was had. Mom met our Dad, Morley and they were married on January 18, 1947. A city girl, Mom began married life as a farm wife/mom/head cook and worked the land with Dad. Mom and Dad were married 25 years before his passing in 1972. Mom and Joanne spent a year in Carman before moving back to Winnipeg where Mom went to work for Birks and Eaton’s. Mom had many friends and traveled both across Canada and abroad.  Mom was able to travel to her parents’ homeland in Kent, England.

Extended family was very important to Mom and she spent many years visiting with her sister Dorothy and husband Russel and all of her nieces and nephews.

Approximately 20 years ago Mom moved to Revelstoke and later to Salmon Arm, British Columbia to be close to her son Wayne. Mom enjoyed singing in the choirs in both Revelstoke and Salmon Arm. This brought Mom a lot of joy as music and performing with her friends was both competitive and fun.  Mom was part of a dance troupe that performed during the war years for the boys when they returned from their tours.

Mom was a great cook and baker.  She had style and panache. Before we could go anywhere Mom had to be well dressed and she added just a little makeup to round out her look.

Mom liked to have fun and was the life of the party. Mom curled and played golf. She was a fan of her kids when they participated in sports – Wayne, the family curler, Lawrie and Joanne’s school sports. Mom had a good sense of humor and could give it as well as take it. Mom was a long-time member of the Carman Legion Ladies Auxiliary having just recently received her 70-year pin which was a tremendous source of pride to her. She spoke her mind and was up to date on what was going on in the world. It is a true accomplishment to live through nine decades. Those who knew and loved Joan will have many fond memories to share.

A Family Celebration of Life will be held at a later date in Carman, Manitoba.

The family would like to acknowledge and thank all of Mom’s friends at Sunridge Estates and Piccadilly Terrace, her homes in Salmon Arm for the past 20 years, as well as the doctors, nurses, caregivers, and staff at Shuswap Lake Hospital for the care and attention given to her over the past 2 years.

Memorial donations may be made to the Shuswap Hospital Foundation in memory of Joan McGill.