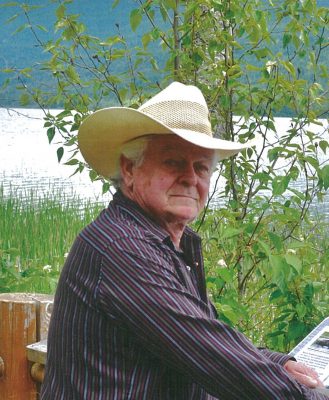 Jack passed away in Salmon Arm, BC at the age of 78.

Jack was born in Red Deer, AB. His family moved to Edmonton and then to Calgary. Jack was in the first graduating class of William Aberhart High School in 1961.

Jack and Leslie (Lester) were married in 1970. Jack worked in the oil and gas industry in Calgary and Oklahoma City. The family returned to British Columbia and entered the tourism industry as part of the family business in 1984. In 2001, Jack and Lester retired to White Lake where Jack became a very active member of the community. He was the President of the White Lake Recreational Society, a member of the Area C Parks Commission, White Lake Volunteer Fire Department and Shifting Saddles 4H Club. Jack will be remembered for his jokes and always having a good story to tell. We will forever remember… Here’s “My Card”.

Jack is survived by his wife Lester of 51 years, his daughters Jodi (Todd) and Patti-Jo (Kevin), his granddaughter Makayla, step-grandchildren Larissa, Bryce, Alexis, Graison, and his brother Phil (Anita), sister Susan (Rusty) and nieces and nephews.  Jack was predeceased by his parents John and Doris McInally.

A special thank you to the staff on Riesling Lane at Mt. Ida Mews.

A Celebration of Life will be held at White Lake, BC in June 2022. In lieu of flowers, donations in Jack’s memory may be made to the White Lake Community Hall or a charity of your choice.