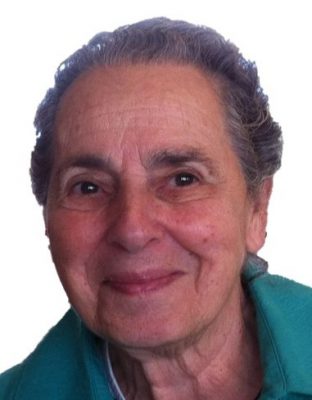 A private graveside service will be held for the family. All are invited to Irene’s funeral on Monday, July 11, 2022, 2:30pm at the Salmon Arm Recreation Center, 2600 10th Ave North East, Salmon Arm followed by fellowship and refreshments at the same venue.

In loving memory of

Irene Mary McNary (LeRose) who passed away at Piccadilly Park Place in Salmon Arm on Monday, 4 July 2022, aged 91. Irene leaves behind Bill, her loving husband of 69 years. Mother of Joyce (Roger Tregear), Brian (Chris), Warren (LenaMarie), and Wayne (Anita). Grandmother of seven, great grandmother of nine, and great great grandmother of four. Daughter of Rosario and Concetta late of Trail, BC. Irene was the third of four children, Vera, Leonard (deceased), and Elaine.

Irene wrote most of this herself – we have just filled in a few gaps where the story was incomplete.

I was born on April 13, 1931, in the smoky city of Trail, BC.  My parents were both born in a tiny village in Southern Italy, and each had emigrated to Canada at a young age.  I was the third child in our family: Vera, Leonard (deceased) and Elaine.

I took all my schooling in Trail, graduating in 1949 and then took one year’s teachers’ training at Victoria Normal School.  September 1950 found me in the cascade Mountains in a country school.  Sheep Creek was a sawmill community and I had 11 students, Grades 1 to 8.  From there I went to Paxton Valley in the Kamloops School District to another small group of students.  During that time, I met Bill and his brother and family who were logging in the area.

We married in April 1953 and lived at the McNary ranch in Skimikin while I taught part of the year in the Turtle Valley School.  We moved to Alberta for a short time in 1954 before moving back to Chase and then Salmon Arm in 1955.

In 1956 I attended a few Gospel Meetings in Armstrong with Jack Price and Warren Wainwright.  I chose to become one of God’s Children in His wonderful family.  I have never regretted this choice and hope my choice would inspire others.  I found out later that I had gone to school both in Trail and Normal School with others who were also part of His family.  I also had a favourite teacher who was of the same faith.

For many years Granny and Grandad McNary were living in the same yard as us and I was learning all kinds of handy things and I’m grateful for those teachings.

In 1966 we became dairy farmers.  We moved to Silver Creek in 1970 where we built a feed lot and meat business.  When the meat plant burned, we moved into Salmon Arm for a few years and worked as railway salvage contractors before we “retired” to White Lake for 10 years and then back into town to be closer to medical support should it become necessary.

We did a lot of travel when we were able – some for work and some for leisure. There was always lots of laughter, company, food, fishing, and camping in the Motorhome.

If Irene was here, I think she would say, “Overall it’s been a good life. There have been some difficult times, for sure, but overall, a great life in a wonderful family.”