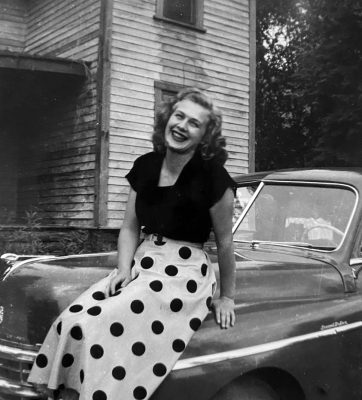 There will be a memorial service followed by a reception for Maureen on July 16, 2022, at 11:00 am at Fischer’s Funeral Home in Salmon Arm, BC.

Maureen Moan (nee Woodcock) passed away on March 22, 2020 at the beginning of the pandemic. Maureen is predeceased by her first husband, Herb Whitehead, and by Melvin Moan whom she married in 1984. Although the facility in which she lived had gone into lockdown, her daughter Leona was able to be with her during her final days. Maureen is lovingly remembered by her children Brian Whitehead (Sheryl), Lynn Whitehead (Leanna) and Leona Claxton (Hugh), and her grandchildren Karrie Whitehead (Anna-Marie), Darryl Whitehead (Claire), Krista Whitehead (Jeremy), Paige Naughton (Mike), and Margot Claxton (Terry), and by her great grandchildren.

Maureen was born on January 2, 1931, in Moose Jaw, Saskatchewan to a farming family. She was the third of four girls born to Florence and Ray Woodcock and remembered spending hours helping on the farm while also attending school. The family eventually moved from Saskatchewan to Alberta by covered wagon when Maureen was around 13 years old; she rode a horse for the journey as it was her job to wrangle the small herd of cattle during the trip. They eventually moved to the Grandview Bench area in Salmon Arm when she was in her teens. There was no way for Maureen to finish high school as the school in Salmon Arm was inaccessible from Grandview Bench, a circumstance that she regretted throughout her life. Maureen was married and the mother of three children by the time she was 21 years old. Although very young herself, she put tremendous energy into raising her children while managing a household with no running water and a wood stove on which to cook. Not having been able to attend high school, Maureen spared no effort in ensuring her children completed school, not an easy task in Burns Lake in the 1960’s. Maureen loved to sing and dance and was a talented artist and seamstress who could turn her hand to many tasks ranging from renovating the basement to repairing the blankets she had sown for her grandchildren.

After her divorce from her first husband, Maureen was fortunate to have found love again with Melvin Moan, who adored her. Mel and Maureen loved to dance, and were a joy to watch on the dance floor.  Maureen embraced being a stepmother of adult children, and formed close relationships with, and is lovingly remember by, her stepchildren Arvid Moan (Sandy), Dan Moan (Vicki), and Jamie Moan, and by her step grandchildren Kristofer Moan, Andrea Moan, Krystal Nemez (Nathan), and Carrie Normandeau (Geoff) and her step great grandchildren.

There will be a memorial service followed by a reception for Maureen on July 16, 2022, at 11:00 am at Fischer’s Funeral Home in Salmon Arm, BC.