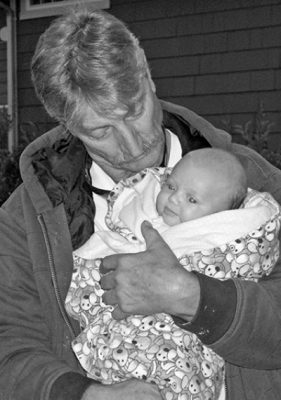 Peter Gerald Murphy was born on October 23, 1956 in a Red Cross outpost hospital in Lillooet BC. He loudly announced his arrival but grew to be a kind and thoughtful little boy who was very interested in the world around him. Peter was the second born child to parents Peter James(Jim) Murphy and Colleen Marie Murphy (nee Stafford), the only brother to his six sisters.

Peter was predeceased by father Jim Murphy, sister Colleen Burns and his maternal and paternal grandparents.

Peter will also be missed by many lifelong friends, colleagues, and significant people, too numerous to mention by name but beloved by Pete nonetheless.

Peter and his sisters shared an adventurous childhood, building stories and memories, and developing his varied skills and a deep appreciation for the outdoors and for animals. Many of our fondest memories of Pete also involve a horse or a dog, and they all include laughter.

Throughout his career as a heavy equipment operator, Pete worked in many areas of BC (“God’s country”) and was highly respected in his field.

Pete was quick-witted, kind-hearted, generous with praise, and always remembered to say “I love you”. His laugh and his smile will forever echo in the hearts of those who knew and loved him.

In our grief, we are buoyed by the hope and promise that his salvation faith in Jesus Christ has ushered Pete into eternal peace. Until forever Pete.