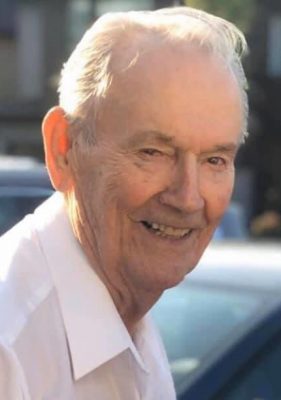 It is with heavy hearts we announce the passing of Michael Thomas Nelson on March 29 at the age of 85. He is survived by his loving wife Anne, of 63 years,
his children, Debbie Pakka, Corinne Gray, Michael Nelson, five Grandchildren and four Great Grandchildren. He is also survived by four siblings, Mary, Anne,
John and Helen and numerous beloved nieces and nephews. He was predeceased by his daughter, Wendy, Grandson Jared, his parents and siblings, Fred,
Paul, Bill and Pauline.
Mike had a witty sense of humor and a great spirit of adventure. As a young man he formed a band with his brother, John, and was accomplished in all areas
of music, whether it was singing, playing guitar or picking up a fiddle. He had many interests and his employment reflected this. He worked in Sales, Diamond
Drilling, Millwork, City Graphic Design and was as a By-Law Officer as well as a Zamboni Driver. He, along with his wife Anne, also owned and operated
a Motel for several years in Salmon Arm.
Mike was one of those people who loved to “tinker” and “invent” and was gifted artistically, leaving behind many oil paintings for his family to admire and enjoy.
Mike lived his life with passion and will be greatly missed for his humor and ability to “entertain.”
If you ever visited the “Nelson” household you were in for some hearty laughter. Such fond memories as we reminisce!
We would like to acknowledge Dr. Bonthuys for going “above and beyond” to care for Mike and to thank the Staff at the Shuswap Lodge for their wonderful kindness
and compassion.
“In the end, it’s not the years in your life that count, it’s the LIFE in your years!” (Abraham Lincoln)
Mike lived life to the fullest!
In his honor, please take a moment to reflect and appreciate the love of family. In lieu of flowers, a donation towards your local food bank would be welcomed during
this time of global pandemic.
A celebration of life will be held at a later date.