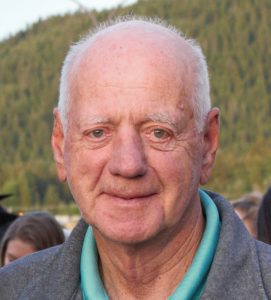 A Celebration of Life will be held Saturday, September 1, 2018 at the Shuswap Lake Estates Community Center (2404 Centennial Drive, Sorrento BC) at 2 pm.

John was born in Arcola, Saskatchewan, and moved with his family to the Kootenays after his father passed away.  He spent his formative years in the Nelson area, where he excelled in sports and spent most of his time at the Nelson Recreation Center.  He was an avid and accomplished basketball and badminton player, and after his Grade 12 graduation he moved to Burnaby where he met the love of his life, Georgina Claire Ettinger.
He spent his accomplished working career of over 60 years in the Telecommunication System Design, Survey and Construction and was widely regarded as an expert in this field.   He continued to work as a consultant well into his 80’s.  He enjoyed golf, his extended winter get-aways to the Palm Springs area, and spending time with his family and many friends.
Jay was predeceased by son Lorne and wife Georgina, and leaves behind his sons Steve (Starr) and Don (Myra), grandchildren Mark (Danielle), Jason, John and Sara, great- grandchildren Oliver and Ella and many nieces and nephews.
A Celebration of Life will be held Saturday, September 1, 2018 at the Shuswap Lake Estates Community Center (2404 Centennial Drive, Sorrento BC) at 2pm.  Every one who knew this exceptional man is invited to attend.  In lieu of cards and flowers, we invite you to make a small donation to a charity of your choice.