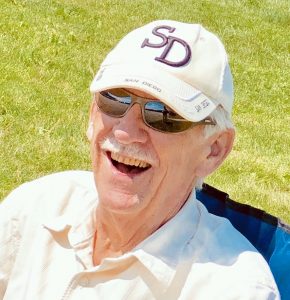 It is with great sorrow that that we announce the passing of our beloved husband, father, grandfather, brother, uncle and friend on August 16, 2018 at the age of 74 years. Mark spent his last day at home, with his beloved wife, Brenda by his side.
Mark will be dearly missed by his loving wife, Brenda and his son, Stephen (Carol) of Canberra, Australia, stepdaughter, Miranda Sips of Edmonton and son in-law, Rob Dandy of Brentwood Bay, Vancouver Island.  Also left to cherish Mark’s memory are grandchildren, Thoran, Mitchell and Shay. Brother Keith Nichol (Jeannie) and numerous nieces and nephews, dear friends John and Ev Reay and family and George and Mary Lou Woznica.
Mark was predeceased by his beloved daughter, Erin, mother, Dorothy and father, Douglas, also his brothers, Douglas (Rowena) and Ted (Thea).
Mark was born in Pender Harbour, BC. The family moved to Vancouver Island where Mark received his education. In 1965 he joined the air force and over the next 28 years he was posted to various places throughout Canada as well as a four year tour in Germany. He retired in 1993 in Edmonton, AB where he met his wife Brenda. Mark spent 13 years there with the commissionaires. They have enjoyed 28 years of a wonderful marriage and particularly the past 12 years of retirement in Salmon Arm, BC where they spent all their days together, reading, traveling, and many visits with dear friends and family.
Mark was a kind, gentle soul known for his frequent smile and laughter. He was well read and had a voracious appetite for learning. People enjoyed his many stories of events and things from around the world. He was a non judgmental man that knew the meaning of “living one day at a time.” He was completely devoted to his wife Brenda and loved the life they shared.
The same dignity that he lived his life was displayed during his short 3 month battle with cancer. He displayed strength, determination to do it “his way.” He was at peace with death and satisfied and grateful that he had a full, good life. His desire to be at home when he passed was fulfilled by the care and commitment of his wife, Brenda to honor his wishes as well as the various medical personnel that were involved in his care. Brenda would like to particularly thank Dr. Rose, Dr. Baldwin, numerous nurses, EMT personal and the palliative care nurse, Allison from the Shuswap Lake General Hospital.
A service will be held at Fischer’s Funeral Services, 4060-1st Ave SW, Salmon Arm, BC on Saturday, August 25th at 1:00 PM. All are welcome to attend.