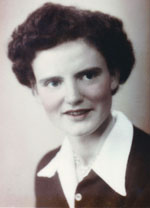 It is with a sad heart that we announce the passing of Elsie Juliane Ostensen August 5, 2014 at Vernon Hospice House at the age of 86.

Elsie was born in Edmonton, AB Nov. 2, 1927 to Niels and Valborg Nielsen. She was the second oldest of four children. At a young age her parents died and all 4 children were adopted by different families in Tilley, AB. Elsie was adopted by Soren and Dagmar Petersen and became an older sister to 3 additional siblings.

Elsie was a telephone operator first in Brooks, AB and later in Vernon, BC.  It was in Vernon that she met Ole who she married in the Bethany Lutheran Church in Tilley, Sept. 7, 1958.  They made their home in Lumby, BC and together they had 3 children.

After 21 years of marriage Ole and Elsie separated and Elsie spent her remaining years in Tilley and lastly in Brooks.  She spent the last 25 years in Pioneer Villa 4 where she made many good friends.  Elsie will be remembered for her sense of humor, her knitting, her crib playing and her humming.

She was predeceased by her 4 parents, her brother Gordon, her brother-in-laws Neil, Gordie, Carl, and Andy, her sister-in-laws Sigrid, Muriel and Lorna, and her husband Ole. She will be sadly missed by her 3 children Darrell Ostensen, Susan Ostensen, and Sharon (David) Greenwood. She also will be greatly missed by her 5 granddaughters—Sarah (Jesse), Ashley, Melissa, Jennifer and Meggan and her one great-granddaughter Julia.  She also has a great grandson due Oct. 28th that she was very excited about.  Elsie will also be very much missed by her siblings Eric (Ethel) Nielsen, Grace Wallace, Peter (Lois) Petersen, Dennis (Inga) Petersen, Doreen (Jim) Burton, and sister-in-law Sophie Nielsen and her many nieces and nephews.

A special thank you goes to Vernon Hospice House for the special care they took of her in her last days and to Debbie Phillips of Interior Health for all her help.

A memorial tea and celebration of life will be held for Elsie at the Legion in Brooks, AB September 27, 2014 at 2 pm.  Those wishing to do so may make a memorial donation to North Okanagan Hospice Society (3506-27th Ave., Vernon, BC   V1T 1S4).