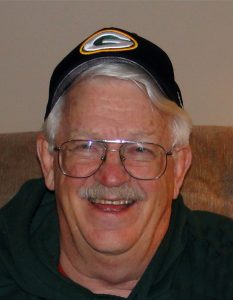 A time of remembering Papa will be held on Saturday, April 27, 2019, 4:00 p.m., SASCU Recreation Centre Auditorium, Salmon Arm, BC.
A live stream of the event will be available and a link will be posted on the Fischer’s Funeral webpage at https://www.fischersfuneralservices.com/latest-news/

Our gracious, most precious, most wonderful Father, received Papa home April 14th in Salmon Arm, British Columbia, as he met with his brothers and sisters in Christ.  Papa now joins his sweet sister Milly Kenyon, his precious daughter Judith Nichols, his parents Raymond and Grace and a host of saints.
Gordon Ray Parmenter was born in Torrance California, to Raymond and Grace Parmenter. He lived in many places over the years, including Prescott Arizona where he was raised, and Helena Montana where he and his dad ran their own logging operation before joining the Navy in 1959. After leaving the Navy Gordon wore many hats including salesman, book keeper, and manager for Coca Cola. Gordon was also a volunteer firefighter, truck driver, logger, pilot, scuba diver, wood worker, hunter, rock hound, hog farmer, chicken farmer and cabinet maker. Gordon is probably best known for his many years of parenting foster children starting in 1979 and continuing to the end in 2019 – 40 years!
In 1965 Gordon married the love of his life, Peggy Ann Tinnin. Their marriage of 53 years produced four children; Judith Rae (Rick), David Royal (Michelle), Suzan Lynne (Dane), and Anthony Raymond (Melissa). Papa is survived by his wife, three children, nineteen grandchildren, eight great-grandchildren and many foster children.
The Parmenter family would like to thank the body of Christ from all over the world who have reached out, prayed for the family and the community and provided love and encouragement in many ways. We are humbled by the generosity of all those who donated meals, finances, and time. We thank our local community for their love and support, and honor for Papa. Thank you to our emergency services: RCMP, Fire Department, Paramedics, Police Based Victims Services and the many other support services for the hard work, concern, and support for our family and the Church of Christ on April 14.
A time of remembering Papa will be held on Saturday April 27 at 4pm in the SASCU Recreation Centre auditorium. A live stream of the event will be available and a link will be posted on the Fischer’s Funeral webpage at https://www.fischersfuneralservices.com/latest-news/