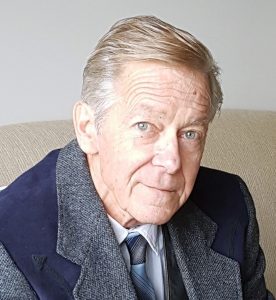 Born James Gordon Deverick in Fresno, California, passed peacefully at home in Salmon Arm with his wife Cynthia at his side at the age of 68 years, due to complications of COPD and Emphysema.
Jim is survived by his wife Cynthia Merrell, his first wife Shelley Woody Huband, daughter Andrea Armour (Tyler), son Steven Perme (Shannon), son Deverick “Shadow” Clingwall, and step-daughter Brandi Anderson (Ryan); Sisters:  Linda (nee Deverick) Holland, Catherine (nee Perme) Cook (Gord), Trisha Cobb (Mike).  Jim also leaves five grandchildren, Logan and Linden Armour of Blind Bay, Brianna and Carter of Airdrie, Alberta, and Jill Anderson of San Diego, California and numerous nieces and nephews.
Jim arrived in Princeton, British Columbia at the age of 21, taking work in a sawmill initially to survive.  Life carried on, getting married, becoming a rancher for this cowboy at heart and starting a family.  As with all families, changes come. Eventually Jim’s early years in auto mechanics served him well when he found himself back in that field in various locations in BC, until he landed at Salmon Arm GM, where he decided to stay and made Salmon Arm his final home.
Jim was able to remain at home as were his final wishes which would not have been possible without the assistance and guidance of the palliative care team of nurses (Allison, Laura and Katherine) at Community Care and Drs. Keith and Laura Hepburn. Thank you all.