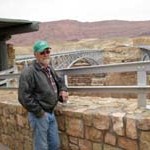 It is with heavy hearts that we announce the passing of Eric Petersen August 26th, 2012 at Shuswap Lake General Hospital after a brief struggle with cancer.

Eric was predeceased by his son, Jason in 2000, both parents, Carl and Frieda Petersen, and his sister Elsie. He leaves to miss him his wife of 47 years, Peggy of Salmon Arm, son Chris, daughter-in-law Jennifer and grandson Marcus, of Campbell River, B.C. Also an extended in-law family with many neices and nephews, in particular Jim and Sherry Stevenson of Lloydminster, Alberta.

Eric worked in construction, starting in Castlegar in l967 on the Arrow Dam, then Hudson’s Hope on the Bennett Dam. He moved his family to Mica Creek in 1973 and lived in the Columbia/Shuswap District until his passing. He was in Revelstoke 17 years, and retired to Sicamous for 14 years, and finally moved to Salmon Arm in 2008. He so enjoyed meeting or bumping into his old construction buddie, and maintained friendships with many of them throughout his life. He will be sadly missed.

We welcome friends and family to his home to celebrate his life on Friday August 31st AT 2:00 p.m.  Internment will be at a later date at Mount Ida Cemetary beside his son Jason.

In lieu of flowers, the family would appreciate a donation to the Terry Fox Foundation in Eric’s memory.