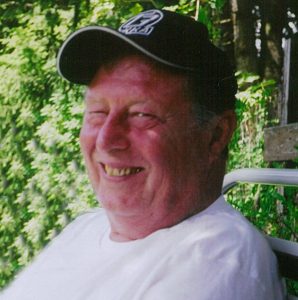 The family of Keary Proud would like to announce his passing on February 8, 2020 at Shuswap Lake General Hospital.
Keary was born in Vancouver, BC on April 8, 1943.  As a young boy he spent several summer vacations at Blind Bay.  There he met Shel Herrick starting a friendship that lasted both of their lifetimes.
After getting married in 1965, Keary moved to Blind Bay from West Vancouver.  Other than a brief year in OK Falls where he was posted with the RCMP, Keary lived and raised his family in Blind Bay.  Keary worked as a carpenter, RCMP constable and small business owner.  He will be remembered for his sense of humour, great laugh and kind nature.
Keary was predeceased by his parents John and Fernie and his beloved wife Mildred.  He is survived by his children Patricia (Kirk), Michael (Courtenay), grandchildren Jordan (Charlene), Kristen, Emmett, Autumn and Brenna.  Also last but not least, his childhood wingman and brother from another mother, Sgt. William Dudley Cruske of Deloraine, MB.
Keary had a difficult last year of life.  He suffered significant financial hardships.  A truly terrible individual took advantage of Dad’s kind nature and generous personality.
In lieu of flowers a donation in Dad’s name may be made to a senior support of your choice.
A graveside service will be held in the spring.  Dad will be laid to rest beside Mom, the love of his life.  He never really left her side.